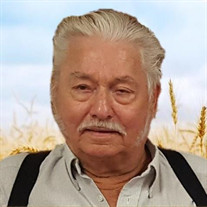 Lowell James Friesen, 77, of McPherson, Kansas, passed away at 10:00 p.m., Friday, December 28th, 2018 at Wesley Medical Center, Wichita, Kansas. Lowell was born in McPherson, Kansas on April 28, 1941, a son of Josephine (Ensz) and Peter W. Friesen. Lowell attended and graduated from Plainview Country School, rural Inman, Kansas and received his GED later in life. He was a member of the Galva United Methodist Church, Galva, Kansas. Lowell was a farmer and through the years also worked worked for Moridge Mfg., Moundridge, Kansas, Empire Township as a road maintainer, Galva, Kansas and retired from Bradbury Company as an assembler, Moundridge, Kansas. Lowell was a board member of the McPherson County Rural Water District #4 and was a former volunteer firefighter for the Galva Fire Department. Lowell enjoyed farming, puttering and tinkering outside in his shed and watching his grandchildren and their sporting events. Lowell knew no strangers and loved visiting and spending time with his friends and family. Lowell was united in marriage to Yvonne Eilene (Ratzlaff) Grant on November 14, 1970 at Galva United Methodist Church, Galva, Kansas. The couple established their first home together in Galva, Kansas. This union was blessed with Yvonne's three children, Jacki, Amy and Lance, and the birth of a son Kraig. He is survived by his wife Yvonne Friesen, of McPherson, Kansas; his children, Jacki Clinton and her husband Tony, of Canton, Kansas, Amy Campbell and her husband Steve, of McPherson, Kansas, Lance Grant and his wife Kathy, of Canton, Kansas, Kraig Friesen and his wife Traci, of Galva, Kansas; his siblings, Weston Friesen and his wife Linda, of Ogallala, Nebraska, JoAnne Friesen, of Inman, Kansas, Marge Goering and her husband Dave, of Moundridge, Kansas, Kenneth Friesen and his wife Rita, of Moscow, Kansas, Royal Dean Friesen and his wife Dawn, of Hardin, Montana and Lynel Friesen and his wife Linda, of Inman, Kansas and his 11 grandchildren and 24 great-grandchildren. Lowell was preceded in death by his parents and a great-granddaughter Shaylynn Widener. The visitation will be held on Thursday, January 3, 2019 from 5:00 p.m. to 7:00 p.m. at Galva United Methodist Church, Galva, Kansas. Funeral service will be held on Friday, January 4, 2019 at 10:30 a.m. at the Galva United Methodist Church, Galva, Kansas with Reverend Mike Miller officiating. Burial will be at the Empire Cemetery, Galva, Kansas. Memorial contributions may be made to Galva United Methodist Church or the Galva Senior Center and they can be sent to Glidden-Ediger Funeral Home, 222 W. Euclid St., McPherson, Kansas. 67460.

The family of Lowell James Friesen created this Life Tributes page to make it easy to share your memories.

Lowell James Friesen, 77, of McPherson, Kansas, passed away at...