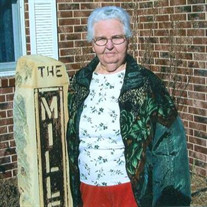 Marcile Pauline Miller, 89, of McPherson, Kansas, passed away at 9:10 p.m., Thursday, January 25th, 2018 while in the company of family members, at Via Christi ,St. Francis , Wichita, Kansas. Marcile was born in on her parents farm, rural Alton, Kansas on September 23, 1928, a daughter of Velma Minnie (Dugan) and Marshall Ney Dibble. Marcile attend the Pleasant Valley Country School, rural Alton, Kansas, and graduated from Woodston High School, Woodston, Kansas in 1947 and was Salutatorian. She was a member of First United Methodist Church McPherson, Kansas where she was a member of the Quilting Circle and served her church in many capacities through the years. Marcile was a farmer's wife and homemaker and took great pride in blessing her family in many loving ways. She later worked for the North Peter Pan Store and Hill Top Turkey Creek Farm both of McPherson, Kansas; Trail side KOA Kamp in Grain Valley, Missouri and was assistant manager of Zarda Dairy Store in Blue Springs, Missouri. She also enjoyed working craft shows through the years. Marcile is a member of Sumner EHU, the V.F.W. Auxiliary Post 2715 where she held many positions and acquired many awards for the V.F.W. and member of American Legion Post 24 Auxiliary. Marcile enjoyed embroidery work, crocheting, quilting, and spending time with her family. She was a member of the Calico Patches Quilt Club of Grain Valley, Missouri. Marcile Dibble was united in marriage to Van Norman Miller on February 2, 1947, at Stockton, Kansas. Van Miller died on March 20, 2002. She is survived by her children, Lee A. Miller, of McPherson, Kansas, Connie K. Nichols, of Little River, Kansas, and Peggy A. Bain and husband John, of Hutchinson, Kansas; her 7 grandchildren, Kelli Willis (Bob Wedel), Jason Highley, Brandy Griffith (Bryan), Melissa Kent, Crystal Beckwith, Brenda Hall, and Breanne Farley (Shawn); her 18 great-grandchildren; 1 great-great-grandchild on the way!!!; several nieces and nephews, other relatives and a host of friends. Marcile was preceded in death by her parents; her husband Van Miller; a son, Bradley G. Miller; a sister, Maxine Dix; and brother, Larry Dibble. Visitation will be on Wednesday, January 31, 2018, from 5 to 7 p.m. at Glidden - Ediger Chapel, McPherson, Kansas. Funeral service will be held at Glidden - Ediger Chapel, McPherson, Kansas, at 11:00 a.m. on Thursday, February 1st, 2018, with Reverend Darren Frazier officiating. Burial will be held at the McPherson Cemetery McPherson, Kansas at a later date. In lieu of flowers, memorial contributions may be made to First United Methodist Church and they can be sent in care of the Glidden - Ediger Funeral Home; 222 West Euclid Street; McPherson, Kansas 67460.

Marcile Pauline Miller, 89, of McPherson, Kansas, passed away at 9:10 p.m., Thursday, January 25th, 2018 while in the company of family members, at Via Christi ,St. Francis , Wichita, Kansas. Marcile was born in on her parents farm, rural... View Obituary & Service Information

The family of Marcile Pauline Miller created this Life Tributes page to make it easy to share your memories.