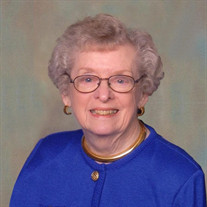 Marie Estelle Twitchell, 95, of McPherson, KS, passed away at 8:56 a.m., Sunday, February 27th, at Cedars House. Marie was born in Washington, DC on March 24, 1926, a daughter of Air Force Colonel Francis Bernard and Margaret Elizabeth (Rieve) O'Donnell. Marie attended Linthicum Heights Elementary School, MD. She then attended and graduated from the institute of Notre Dame, Baltimore, MD. She also attended the Bard Avon School at Baltimore; She also studied at the San Antonio College and St. Mary's University in San Antonio, Texas; and later graduated from the McConnell Airline Stewardess School, Minneapolis, Minnesota. She was a member of St. Joseph's Catholic Church McPherson, KS 67460. She was a former member of St. Lawrence Catholic Church, Alexandria, VA; and Santa Rosa Catholic Church, Georgetown, TX. She was baptized on April 25, 1926, at St Elizabeth's Catholic Church, Baltimore, MD by Monsignor John J. Murray. She was employed as an Administrative Assistant at Woodlawn Plantation Alexandria, VA., for 14 years. She worked for the U.S. Government for several years in Colorado and Texas. Her favorite job was in the Public Information office at 4th Army Headquarters in the Quadrangle at Fort Sam Houston, Texas. when General Jonathan M. Wainwright was the Commanding General. She worked for two years as the Administrative Assistant to the state manager of the Texas Company before her marriage on May 2, 1953. Marie Estelle O'Donnell was united in marriage to Alvin Twitchell at the Catholic Chapel in Ft. Sam Houston, Texas, on May 2, 1953. Alvin died on January 13, 2013. As the wife of career Air Force Officer Colonel Alvin Twitchell, she accompanied him on military assignments to Europe and throughout the United States. They settled in Alexandria, Virginia in 1972. In 1974 Marie went to work in Mount Vernon, Virginia at Woodlawn Plantation, a property of the National Trust for Historic Preservation. She and her husband Al both retired in 1989 and began their world travels. In 1996 they moved to Sun City in Georgetown, Texas where they enjoyed 13 years of warm weather, playing golf and playing duplicate bridge. In 2009 they moved to the Cedars in McPherson, Kansas to be near their daughter Patricia and husband Gary Goad. Marie was active as an golfer and avid duplicate bridge player, as well as a Red Cross volunteer, secretary, parliamentarian or committee chairman of various Officer's Wives's clubs, Girl Scout troop organizer and troop leader, Cub Scout Den mother, toastmistress, hospital volunteer at Mount Vernon Hospital in Alexandria and President of the Griffiss AFB Women's Golf Assn. She is survived by her children, Patricia T. Goad and husband Gary, of McPherson, Kansas and Douglas J. Twitchell and wife Hilary, of Portland, Oregon; her brother, Francis B. O'Donnell and wife Sally, of Derby, Kansas; her three grandchildren, Courtney Wilkey and husband Tanner, of Sterling, Kansas, Brian Goad and wife Kara Janae, of Cimarron, Kansas, and Zach Twitchell, of Portland, Oregon; her five great-grandchildren, Brynley Janae Goad, of Cimarron, Kansas, Kopper Leland Goad, of Cimarron, Kansas, Annie Marie Wilkey, of Sterling, Kansas, Kason Goad, of Cimarron, Kansas and Hank Wilkey of Sterling, Kansas; other relatives and a host of friends. She was preceded in death by her parents; and her husband Alvin Twitchell. A Mass of Christian Burial will be celebrated at 2:00 PM on Thursday, March 3rd 2022 at St. Joseph's Catholic Church in McPherson, KS with Fr. Ben Shockey officiating. Inurnment will be at the McPherson Cemetery McPherson, KS. In lieu of flowers, memorial contributions may be made to St. Joseph's Catholic Church or The Alzheimer's Association in memory of Marie and they can be sent in care of the Glidden - Ediger Funeral Home; 222 W. Euclid; McPherson, Kansas 67460.

The family of Marie Estelle Twitchell created this Life Tributes page to make it easy to share your memories.

Marie Estelle Twitchell, 95, of McPherson, KS, passed away at...

Send flowers to the Twitchell family.