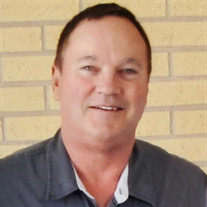 Mark William Childs, 63, of McPherson, Kansas, passed away at 6 a.m., Wednesday, November 10th, suddenly, at his home. Mark, son of Robert Dallas and Alice Irene (Hackler) Childs was born July 7, 1958 in Hutchinson, Kansas. He was the youngest of five children born to this union, four sons and one daughter, David, Patricia, Galen, Craig, and Mark. Mark attended Fairfield grade school and graduated from Fairfield High School, Fairfield, Kansas in 1976. He was a member of Church of Christ Sylvia, Kansas. Mark William Childs was united in marriage to Charlene Sue Zerger on February 3, 1990 at Kingman, Kansas. The young couple established their first home together in Hutchinson, Kansas. This twelve year union was blessed with the birth of three children, two daughters and a son, Chelsea, Claire, and Connor. Mark was a 3rd generation milk hauler and owner and operator of Childs Liquid Transports of Central Kansas. He went on to work for EATON of Hutchinson, Kansas where he was a CNC Machinist before finishing his career at Pfizer in McPherson, Kansas. Mark enjoyed participating in 4-H while growing up and he took pride in developing his lawn mowing business as a young man. Working with his hands, telling funny stories, and watching movies made him happy. Mark loved being with his children and was particularly close with his daughter Claire. Hearing stories about and seeing pictures of his grandpets also brought him great joy. He is survived by his children, Chelsea Childs wife of William Sibley II, of Norman, Oklahoma, Claire Childs, of Kansas, and Connor Childs, of Wichita, Kansas; his mother, Alice Childs, of Plevna, Kansas; his siblings, David Childs, of San Diego, California, Galen Childs and wife Cindy, of Abbyville, Kansas, Craig Childs and wife Carla, of Abbyville, Kansas, and Patricia Schmidtberger and husband Neal, of Hutchinson, Kansas; his grandpets; other relatives and a host of friends. Mark was preceded in death by his father, Robert Childs. Private family service will be held at a later date. In lieu of flowers, memorial contributions may be made to Mark W. Childs memorial fund and they can be sent to Glidden-Ediger Funeral Home; 222 W. Euclid St., McPherson, Ks. 67460.

The family of Mark William Childs created this Life Tributes page to make it easy to share your memories.

Mark William Childs, 63, of McPherson, Kansas, passed away at...

Send flowers to the Childs family.