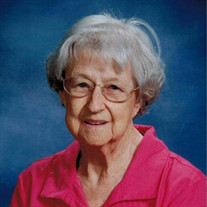 Martha Eleanor Anderson, 97, of McPherson, Kansas, passed away at 3:34p.m., Friday, July 28th, 2017, while in the company of family members, at Pine Village, in Moundridge Kansas. Martha was born in McPherson, Kansas on May 19, 1920, a daughter of Marie Christine (Malm) and Harry Eugene Carlson. Martha attended Lincoln grade school, McPherson Junior High School and graduated from McPherson High School, McPherson, Kansas in 1938. She was a member of Trinity Lutheran Church McPherson, Kansas. Martha was a homemaker and worked as a blue print reader for Beechcraft Aviation and was the secretary for Dr. Robert Sohlberg from 1963 to 1975. Martha enjoyed her family, camping, and her pets. Martha was united in marriage to Charles Alden "Charlie" Anderson on November 15, 1941 at Martha's parents home in McPherson, Kansas. Charlie died on May 20, 2006.. She is survived by her daughter, Sandra L. Uhrig and her husband Verlyn, of Marion, Kansas; her daughter-in-law, Virginia Anderson, of Palm Beach Gardens, Florida; her nieces, Carla Jo Shaw, of McPherson, Kansas, Garnet Fiedler and her husband Roger, of McPherson, Kansas and Jennifer James and her husband Kirk, of South Port, North Carolina; her grandchildren, Shannon Uhrig and his wife Marla, of Wichita, Kansas, Carrie Belshe and her husband Matthew, of Moundridge, Kansas, Heather Smith, of Emporia, Kansas, Brian Anderson and his wife Courtney, of Kansas City, Missouri, and Callie Anderson, of Midland, Texas; her great-grandchildren, Taylor Smith, Simon Uhrig, Zoey Uhrig, Addison Uhrig, Jack Anderson, and twins Sienna Belshe and Destry Belshe; other relatives and a host of friends. Martha was preceded in death by her parents; her husband Charlie; a grandson, Bradley Anderson; brother, Adel "Buss" Carlson; and her son, Gene Alden Anderson. Friends are invited to call Wednesday from 3 p.m. to 7 p.m. with the family present from 5 to 7 p.m. at Glidden - Ediger Chapel, McPherson. The memorial service will be held at Glidden - Ediger Chapel, McPherson, Kansas, at 10:00 a.m. on Thursday, August 3rd, 2017 with Reverend Richard Munson officiating. The final resting place will be at the McPherson Cemetery, McPherson, Kansas. In lieu of flowers, memorial contributions may be made to Martha Anderson memorial fund and they can be sent in care of the Glidden - Ediger Funeral Home; 222 West Euclid Street; McPherson, Kansas 67460.

Martha Eleanor Anderson, 97, of McPherson, Kansas, passed away at 3:34p.m., Friday, July 28th, 2017, while in the company of family members, at Pine Village, in Moundridge Kansas. Martha was born in McPherson, Kansas on May 19, 1920, a daughter... View Obituary & Service Information

The family of Martha Eleanor Anderson created this Life Tributes page to make it easy to share your memories.