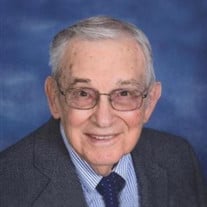 Marvin John Goering, 87, passed away on Wednesday, March 23, 2022 at his home in rural McPherson, Kansas following a brief stay in hospice. Marvin was born on the family farm near Montezuma, Kansas on March 29, 1934, the son of Joe J.F. and Emma (Schrag) Goering. He was the sixth of seven children. After the family moved to rural Galva, Kansas, Marvin attended Happy Hollow School and graduated from Galva High School. Throughout his childhood, he worked on the family farm with his parents and siblings. Following 1-W service at Presbyterian Hospital in Denver, Colorado, Marvin graduated from Bethel College, North Newton, Kansas in 1958. He later received his Masters Degree in Industrial Education from Emporia State University. On June 4, 1959, Marvin married Mary Beth Funk of rural Hillsboro, Kansas, who was a fellow student at Bethel College. They began married life on a farm near McPherson where they were still living as of Marvin’s death. The couple had two daughters: Anne Elizabeth, born in 1963, and Gail Marie, born in 1964. Marvin farmed land in McPherson County throughout his life. Together with his brothers, he farmed land in other Kansas counties and engaged in various other businesses. Marvin also taught industrial arts, first at Salina South Junior High, and then for more than 25 years at McPherson Junior High (later McPherson Middle School). He served the McPherson County community in various capacities, including on the boards for Rural Water District No. 4, Empire Township, and the National Resources Conservation Service. When he was not farming or fixing things, Marvin enjoyed fishing, woodworking, and watching basketball, auto racing and old movies. He was an avid reader of history and biography. He was fortunate to live within a few miles of his siblings, and the families enjoyed many happy times together. Marvin is survived by his wife, Mary Beth, of rural McPherson; his daughter Anne Groves, husband Jan and granddaughter Lia of Valley Center, Kansas; his daughter Gail Goering of rural Lehigh, Kansas; his brother Kenneth Goering and wife Paula of rural Galva, and numerous nieces and nephews. He was preceded in death by his parents; his sister Margaret and husband Walter Schrag; his brother Merlin; his brother Virgil and wife Verna; his brother Melvern and wife Erma; and his brother Duane and wife Neva. A visitation will be held on Monday, March 28, 2022 from 6 pm to 8 pm at Glidden-Ediger Chapel, McPherson, Kansas. Burial will be on Tuesday, March 29, 2022 at 10 am at Eden Mennonite Church Cemetery, Moundridge, Kansas. A memorial service will follow at 11 am at Eden Mennonite Church, with luncheon thereafter in the fellowship hall. In lieu of flowers, memorial contributions may be made to Mennonite Disaster Service and may be sent to Glidden-Ediger Funeral Home, 222 W Euclid St, McPherson, KS 67460.

Marvin John Goering, 87, passed away on Wednesday, March 23, 2022 at his home in rural McPherson, Kansas following a brief stay in hospice. Marvin was born on the family farm near Montezuma, Kansas on March 29, 1934, the son of Joe J.F. and... View Obituary & Service Information

The family of Marvin John Goering created this Life Tributes page to make it easy to share your memories.

Send flowers to the Goering family.