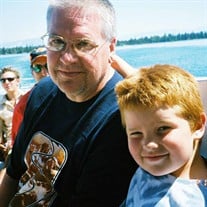 Max Alan Nelson, 68, of McPherson, Kansas, passed away at 12:02 p.m., Monday, August 7th, 2017 unexpectedly, at McPherson Hospital. Max was born in Topeka, Kansas on May 27, 1949, son of Roberta Mary (McHenry) Nelson and Wallace Albert Nelson.   Max attended the Topeka grade schools and graduated from McPherson High School, in McPherson, Kansas.  He attended Ottawa University in Ottawa, KS earning a degree in education. He then received his Master’s in Theology and graduated from Phillips University in Enid, Oklahoma.   Max served as a pastor for the Disciples of Christ Church for 16 years serving in many different states. He also worked as a chef in many different locations throughout Kansas.    Max was an Eagle Scout and volunteered for the Boy Scouts for over 20 years. He was also very proud to have traveled to 49 different states over the course of his life showing his children and grandchildren the wonderful diversity of our nation.   Max Allen Nelson was united in marriage to Cynthia Marie Ford on December 14, 1973 in McPherson, Kansas.   He is survived by his loving and devoted wife of over forty-three years, Cynthia Marie Nelson of McPherson, Kansas; his sons, John Alrik Nelson of Ohio, Andrew Alek Nelson of Florida, and his daughter-in-law Elizabeth Godbold Nelson of Tennessee; his mother, Roberta Mary Nelson, of Idaho, his sisters and brothers-in-law, Wendy Nelson and her husband Michael of Colorado, Nancy Jo and Tim Myer of Idaho, and his three grandchildren, Allyson, Gavin, & Anja, as well as several nieces and nephews; other relatives and a host of friends.   Max was preceded in death by his father, Wallace Nelson.   The memorial service will be held at The Girl Scout Cabin at Lakeside Park, McPherson, Kansas, at 1:00 p.m. on Sunday, August 13th, 2017.   Flowers sent to the service or memorial contributions for the Max Nelson Memorial Fund may be sent in care of the Glidden – Ediger Funeral Home; 222 West Euclid Street; McPherson, Kansas 67460 in memory of Max.

The family of Max Alan Nelson created this Life Tributes page to make it easy to share your memories.