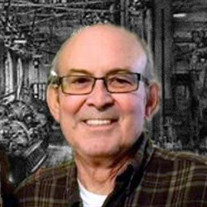 Michael Roger Goscha, 73, of McPherson, Kansas, passed away at 8:08 a.m., Monday, April 29th, 2019 while in the company of family members, at Wesley Medical Center, Wichita, Kansas. Michael was born in Wichita, Kansas on May 29, 1945, a son of Raymond W. and Monica M. (Campbell) Goscha-Zodrow. Mike attended St. Johns grade school, Hoisington, Kansas and graduated from Hoisington High School, Hoisington, Kansas in 1963, Mike then attended Fort Hays State University, Hays, Kansas. He was a member of St. Joseph's Catholic Church in McPherson, where he was a member of the Knights of Columbus. He served in the U.S. Air Force as a Sgt in the Vietnam War. Through the years Mike worked for various machine shops in Kansas, he then worked for American Maplan, McPherson, Kansas, while operating his own machine shop "Triple M", McPherson, Kansas. Mike was a member of American Legion Post 24 of McPherson. Mike was an avid outdoorsman and enjoyed playing pool, cards, was an excellent machinist and loved spending time in his man-cave, spending time with family and grandchildren. Michael Roger Goscha was united in marriage to Rita M. Huslig on April 16, 1966 in Odin, Kansas. The young couple established their first home together in Wichita, Kansas. This union was blessed with the birth of two children, a son and a daughter, Chad and Richelle. He is survived by his loving and devoted wife Rita Goscha, of McPherson, Kansas; his children, Chad Goscha and his significant other Karen Brown, of Olathe, Kansas, Richelle Barkdull and her husband Ryan , of Andover, Kanas and Scott Taylor and his wife Lori, of Monte Vista, Colorado; his siblings, Ron Goscha and his wife Darlene, of Carbondale, Colorado, Gary Goscha and his wife Stephanie, of Overland Park, Kansas, Sheryl Hays and her husband Jim, of Wichita, Kansas and Gregg Goscha and his wife Marie, of Wichita, Kansas. He is also survived by his grandchildren Abigail Goscha, Alexis Goscha, Kylie Goscha, Ashton Barkdull, Bryce Barkdull. Mike was preceded in death by his parents and a brother Craig Goscha. Visitation will be held on Monday, May 6, 2019 at St. Joseph's Catholic Church from 6:00 p.m to 7:00 p.m. with a Rosary at 7:30 p.m.. A Mass of Christian Burial will be held at St. Joseph's Catholic Church on Tuesday, May 7th, 2019 at 10:00 a.m., with Fr. Ben Shockey officiating. Burial will be at McPherson Cemetery McPherson, Kansas with military honors presented by the American Legion Post 24 and the Veterans of Foreign Wars Post 2715, both of McPherson. In lieu of flowers, memorial contributions may be made to Leukemia and Lymphoma Society or St. Joseph's Catholic Church and they can be sent to Glidden-Ediger Funeral Home; 222 W. Euclid St., McPherson, Ks. 67460..

Michael Roger Goscha, 73, of McPherson, Kansas, passed away at 8:08 a.m., Monday, April 29th, 2019 while in the company of family members, at Wesley Medical Center, Wichita, Kansas. Michael was born in Wichita, Kansas on May 29, 1945, a son... View Obituary & Service Information

The family of Michael Roger Goscha created this Life Tributes page to make it easy to share your memories.

Michael Roger Goscha, 73, of McPherson, Kansas, passed away at...

Send flowers to the Goscha family.