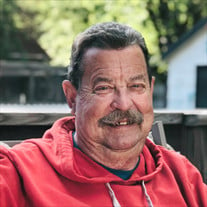 Michael Kent McMurray, 72, of McPherson, Kansas, passed away Friday, April 22nd 2022, at his home. Mike was born in McPherson, Kansas on July 22, 1949, a son of Mildred "Millie" Louise (Doerksen) and Russell Eugene McMurray. Mike attended and graduated from Canton High School, Canton, Kansas. He then attended Bethany College Lindsborg, Kansas until his enlistment into the United States Army. He honorably served in the U.S. Army with the 25th Infantry Division 65th Engineer's Battalion, Company C during the Vietnam War. He received the National Defense Service Medal, Good Conduct Medal, Army Commendation Medal, Vietnam Service Medal, Bronze Star Medal, Vietnam Campaign Medal W/60 Device, 2 Over-seas Bars, 3 Camp X 120. Michael Kent McMurray was united in marriage to Lori Ann Ediger on February 21, 1976 at McPherson, Kansas. The young couple established their first home together in McPherson. They were blessed with the birth of two children, one son and one daughter, Derek and Katie. Through the years Mike worked for American Farm Supply as a Service Technician and then started with N.C.R.A. in 1983 and worked in Maintenance as a Pipefitter, Rigger, and Insulator prior to his retirement in 2011. Mike was a member of the American Legion Post 24 and Veterans of Foreign Wars Post 2715 both of McPherson. Mike enjoyed reading, golfing, spending time with his family especially his grandkids, socializing with his friends, fishing, hunting, and loved a good cocktail. He is survived by his loving and caring wife of over 46 years, Lori McMurray, of McPherson, Kansas; his children, Derek McMurray and his wife Mary Shannon, of Kansas City, Missouri and Katie Anderson and husband Travis, of Colorado Springs, Colorado; his brothers, Craig McMurray and wife Frankie, of Indian Wells, California; brother Brent McMurray, of McPherson, Kansas, and Kelly McMurray, of Los Angeles, California; his brother-in-law, James Ediger of Papillion, Nebraska; his six grandchildren, Sierra Anderson , Cora Anderson, Blake Anderson, Abbigail Anderson, Garrett McMurray and Elliot McMurray; his 1 great-granddaughter, Reyna Parra-Anderson; other relatives and a host of friends. Mike was preceded in death by his parents, Russell and Millie McMurray. A memorial service will be held at 11:00 a.m. on Monday, May 2nd 2022 at Glidden - Ediger Chapel in McPherson, Kansas with Pastor Lynn Scott officiating. Burial will be in the McPherson Cemetery, McPherson, Kansas with military honors presented by members of the Veterans of Foreign Wars Post 2715 and American Legion Post 24 and Mark Casebeer providing Taps. In lieu of flowers, memorial contributions may be made to American Legion Post 24 or the Veterans of Foreign Wars Post 2715 both of McPherson in memory of Mike and they can be sent in care of the Glidden - Ediger Funeral Home; 222 West Euclid; McPherson, Kansas 67460.

The family of Michael Kent McMurray created this Life Tributes page to make it easy to share your memories.

Send flowers to the McMurray family.