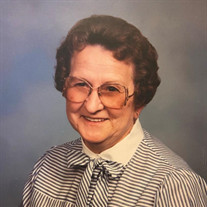 Minnie Elizabeth Atkinson, 92, of McPherson, Kansas passed away at 4:15 a.m., Sunday, December 6th, 2020 peacefully, at Schowalter Villa, Hesston, Kansas. Minnie was born in Atlanta, Georgia on September 24, 1928, a daughter of Harry Stanley and Athey Wilks (Pepperdine) Chalmers. She was a member of First United Methodist Church in McPherson. Minnie was a homemaker and she took great pride in providing for her family in this manner. She also owned and operated her own beauty shop and later worked at McPherson College in the Maintenance Dept. Minnie was a member of VFW Auxiliary Minnie enjoyed sewing, being a scout leader for Brownies and Boy Scouts of America, VFW Junior Auxiliary Leader, fishing, reading, gardening, especially her flowers and spending time with her friends and family. Minnie Elizabeth Chalmers was united in marriage to Charles Cornelius "Chuck" Atkinson on January 1, 1946 in Herington, Kansas while he was on leave from the Navy. After he returned after his honorable discharge on April 20, 1947 the young couple established their first home together in Galva, Kansas. This union was blessed with the birth of two children, a daughter and a son, Connie C. and Larry N. Charles died on August 10, 2004. She is survived by her daughter Connie Bunn and her husband Thomas, of Canton, Kansas. She is also survived by four grandchildren - Talon Bunn, Isaac Bunn, Caleb Bunn and his fiance Jane Vachal and Gavin Bunn(Sarah) 3 -great-granddaughters, Chloe Bunn, Bronwyn Bunn and Maeve Bunn Minnie was preceded in death by her parents; her husband Charles "Chuck" Atkinson and her son Larry Atkinson A private graveside service will be held at the McPherson Cemetery, McPherson, Kansas, with Reverend Brent Horne officiating. Memorial contributions may be made to Harry Hynes Hospice and they can be sent to Glidden-Ediger Funeral Home; 222 W. Euclid, McPherson, Ks. 67460.

The family of Minnie Elizabeth Atkinson created this Life Tributes page to make it easy to share your memories.

Send flowers to the Atkinson family.