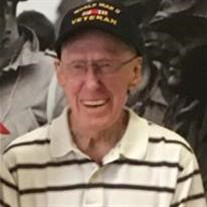 Morris Dale Heitschmidt, 95, of McPherson, Kansas, passed away on Monday, November 25, 2019 while in the company of family, at McPherson Memorial Hospital in McPherson, Kansas.     Morris was born on the family farm in Ellsworth County, Kansas on January 7, 1924, the son of Louis Carl "Lou" and Della Gustina (Droegemeier)  Heitschmidt.    Morris attended and graduated from Geneseo High School (class of 1942), Geneseo, Kansas. He then attended Salt City Business College before entering the Army.    While in the Army, Morris met the love of his life, Mary Earl (Morris) Heitschmidt, while stationed in Longview, TX. Morris was a Staff Sergeant while in the Army during WWII and was stationed in Europe. After the war Morris was united in marriage to Mary on June 30, 1946 in Longview, Texas. They established their first home together in Geneseo, Kansas.      Morris and Mary moved to McPherson in 1954 when he took a job with KNEX radio station, and had called McPherson home ever since. Morris worked several years for Reggie’s Floor Covering and Johns-Manville where he retired at age 65.     For 65 years he has been a member of the First United Methodist Church, McPherson, Kansas.     Morris had a love of music and was very active singing Barbershop both in a quartet and Chorus. He enjoyed serving his Lord and others, traveling, and spending time with family. Morris was also a long-time community volunteer for Meals on Wheels and the Hospital Auxiliary for over 25 years. He also enjoyed volunteering at the Save-N-Share. He was a member of the American Legion Post 24 McPherson.      He is survived by his children, Kathryn Cavalier, of Pampa, Texas, Susan Leahy and husband Robert, of Edmond, Oklahoma, Scott Heitschmidt and wife Sally, of Hutchinson, Kansas, Jill Richards of Montgomery, Texas, and Todd Heitschmidt and wife Terri, of Abilene, Kansas; his 14 grandchildren, and 27 great-grandchildren; several nieces and nephews, and other relatives and a host of friends.    He was preceded in death by his loving and devoted wife of over 71years, Mary Heitschmidt; parents, Lou and Della Heitschmidt; and his brother and sister, Chet Heitschmidt and Laverne Hunter.     The memorial service will be held at 11:00 a.m. on Saturday, November 30, 2019 at the First United Methodist Church, McPherson, Kansas, with the Reverend Lacy Wheeler officiating.    Burial will be at a later date at the Kansas Veterans Cemetery, Manhattan, Kansas. Memorials in memory of Morris are suggested to the First United Methodist Church or Meals on Wheels and they can be sent in care of the Glidden - Ediger Funeral Home; 222 West Euclid Street; McPherson, Kansas 67460.

Morris Dale Heitschmidt, 95, of McPherson, Kansas, passed away on Monday, November 25, 2019 while in the company of family, at McPherson Memorial Hospital in McPherson, Kansas.     Morris was born on the family farm in Ellsworth County, Kansas... View Obituary & Service Information

The family of Morris Dale Heitschmidt created this Life Tributes page to make it easy to share your memories.

Send flowers to the Heitschmidt family.