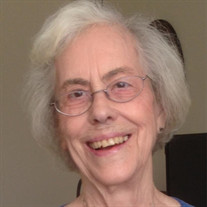 Naomi Jean Lambert, 91, of Shawnee Mission, KS. passed away Friday, December 13th, 2019 suddenly, at Bickford Place. Naomi was born in Wellsville, Kansas on March 28, 1928, a daughter of Lela Marie (Sleppy) and Raymond Leroy Wiggins. Naomi attended the Wellsville grade schools and graduated from Wellsville High School, Wellsville, Kansas in 1946. She was a member of First United Methodist Church McPherson, and served her church in several capacities through the years. Naomi worked at Stanley's Clothiers as a seamstress and did alterations for others. She was a homemaker and she took great pride in providing for her family in this manner. She later worked for Farmers Alliance Insurance Company and started out as a Key-punch operator, then became a Computer Operator, and retired as a Computer Programmer. Naomi was a member of Order of Eastern Star, and What Not Club. Naomi enjoyed gardening, all kinds of crafts from crocheting, needle point, wood working, wood carving just to name a few, cooking, and spending time with her family. Naomi Wiggins was united in marriage to Reginald "Reggie" Hapgood on September 11, 1949 at McPherson, Kansas at the First United Methodist Church. The young couple established their first home together in McPherson. They were blessed with the birth of two children, one daughter and one son, Kathy and Curtis. The family was deeply saddened by the unexpected death of Reggie May 12, 1969. Naomi Hapgood was united in marriage to James Lambert in October of 1971 at the Chapel of the First United Methodist Church in McPherson. Jim died in the summer of 1979. She is survived by her children, Kathy Taylor, of Topeka, Kansas and Curtis Hapgood and wife Margaret, of Merriam, Kansas; her stepchildren, Jim Lambert and wife Phyllis of Fredonia, Kansas; Jeff Lambert and wife Bonnie, of Sebring, Florida, and Nancy Gallinger and husband Bruce, of Cheyenne, Wyoming; her two grandchildren, Matthew Taylor and wife Michelle and Haley Hapgood; 11 step grandchildren, Jim Lambert and his wife Melinda, Matt Davis and wife Lori, Beth Williams, Kelsie Proehl and husband Clifford, Doug Lambert and wife April, Candice McAndrews and husband Thomas, Sean Lambert and wife Desiree, Austin Lambert, Ben Gallinger and wife Jamie, Nick Gallinger and wife Betsey, Matt Lambert, and Molly McGaughey; 10 step-great-grandchildren, Zach Davis, Luke Davis, Caleb Davis, Trent Gashler, Cody Gashler, Harper Proehl, Morgan Proehl, Raef Proehl, Lilly Lambert, and Vivienne McAndrews; other relatives and a host of friends. Naomi was preceded in death by her parents; her husbands, Reggie Hapgood and Jim Lambert; her brothers, Donald and Larry Wiggins; and a step-son, Cliff Lambert. Visitation will be held on Friday, December 20, 2019 from 5 p.m. to 7 p.m. at Glidden - Ediger Chapel, McPherson. Funeral service will be held at Glidden - Ediger Chapel, McPherson, at 10:00 a.m. on Saturday, December 21st, 2019 with Reverend Lacey Wheeler officiating. Burial will be in the McPherson Cemetery, McPherson, Kansas. In lieu of flowers, memorial contributions may be made to Alzheimer Association and they can be sent in care of the Glidden - Ediger Funeral Home; 222 West Euclid Street; McPherson, Kansas 67460.

The family of Naomi Jean Lambert created this Life Tributes page to make it easy to share your memories.

Send flowers to the Lambert family.