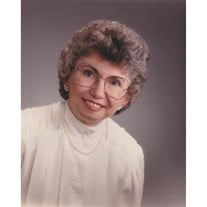 A long-time McPherson resident, Norma Tucker passed through the veil between heaven and earth ever so gently the morning of May 22, 2016. She was under Hospice care at The Cottages of Chandler Creek in Round Rock, TX. Dr. Norma Tucker was born, Norma Jean Redwine, Feb. 11th, 1930 in Harrah, Oklahoma. She was the youngest of five children born to Jeff Lee Redwine (1889 –1969) and Mary Ellen Ward Redwine (1897 –1962). Both her parents are buried at Memory Lane Cemetery, Harrah, OK. Norma's three brothers and one sister are all now deceased. They were, by order of birth: Berlin Leon Redwine, born 1914; Tenna Mae Redwine, born 1916; Benny Lee (Shorty) Redwine, born 1919; Bobby Joe Redwine, born 1924. Norma married Henry Vee Tucker, Jr. on Dec.28th, 1958. Together they had four daughters, seven grandchildren and two great-grandchildren. That family includes: Daughter: Vanessa Vee Tucker (1962-1997). Daughter: Pamela Suzanne Tucker and her partner Alison Goodgame with their two children, Savanna Vee Tucker and Harrison Vee Tucker all residing in Round Rock, TX. Daughter: Gloria Tucker Rennie and her Husband, Raymond M. Rennie of San Luis Obispo, CA and their three sons, Edward Tucker Cokely and wife Kortni Jones Cokely residing in Norman OK, Evan Morgan Rennie currently at San Jose State Univ, San Jose CA, and Colin Matthew Rennie currently at Rutger’s Univ. in Highland Park, NJ. Daughter: Cynthia Lee Jamieson residing in Frisco, TX, and her two children: Jennifer Dawn Jamieson of Colleyville, TX. and Kyle Tucker Jamieson with his two children, Jessica Jamieson and Tucker Jamieson all of Bedford, TX. Norma's beloved husband, Vee, preceded her in death in April 2003.Norma graduated from McPherson College with a BA in English in 1967. She continued with graduate studies earning a Masters Liberal Studies (MLS) from O.U. in 1972, a Specialist in Education (SpE) from Wichita State U. in 1979 and her Doctorate of Education (EdD) from K.U. in 1980. In 1992, Norma was awarded McPherson College’s most prestigious alumni award; The Citation Of Merit. In March 1996 McPherson College named Norma: Professor Emerita.Norma devoted her career to education. According to her, “education is the training of the mind for Great Thinking”. and “writing is simply the process for the refinement and dissemination of Great Thinking”. Many, many bright and talented students learned to write through immersion in Norma’s philosophical maxim, “There is no good writing; there is only good rewriting”. Many of her students went on to pursue writing careers of merit in journalism, publishing and other areas of public communications. To her great Joy, many of her students remained in touch with her and became beloved friends through the rest of her life.Norma taught Journalism at Buhler High 1968-1971 then joined McPherson College as a teacher and Director of Publicity from 1971-1976. In 1976 she became Assoc. Dean of English and Journalism, then from 1979-1980 : Dean of Faculty. From 1980-1986 Dr. Tucker served as Vice President/Academic Services . Her achievements lead her to be listed in Who’s Who editions: In The World, Contemporary Journalists 1977, Personalities of the West and Midwest 1979 and The World’s Who’s Who of Women in Education.Second only to serving and educating others was Norma’s dedication to writing. Her own published works included books: Virginia Colonials and their Maryland Relatives, Clearfield Co. Baltimore and Fledgling Eagle: Captain William Tucker and the New World Colony Library Research LRC, Monroe, NY. and dozens of articles, papers and poems published in over 80 books, magazines, journals, reviews , and papers.In addition to her contributions to her family and career, Norma was deeply committed to her Christian Spiritual Faith and it’s directives to practice charity and service. She lived her faith on all levels as an active member of First Congregational United Church of Christ, McPherson, KS. and it’s “Minister’s Scholarship Board” She served on the McPherson County Hospital Board of Directors and The McPherson County Health Foundation Board of Directors. Norma served the public as a member of the KPTS-Kansas Public Television Board of Directors for 11 years and as Chairperson of for another 3 years. Yet of all her volunteer and charitable activities, she seemed most pleased (yet secretive) about her 50 years as a member of the local EU Chapter of PEO, a women’s philanthropic organization.Visitation will be held on Tuesday May 31, 2016 from 4 to 7 p.m. with the family present from 5 to 7 p.m. at Glidden - Ediger Chapel, McPherson, Kansas.Funeral service will be held at 11:00 a.m., on Wednesday, June 1, 2016 at First Congregational United Church of Christ, McPherson, Kansas, with Reverend Lawrence D. Clark officiating.The final resting place will be at the Liberal Cemetery Liberal, Kansas. Norma and her family request that memorial contributions be directed to The McPherson Schools Art Collection Preservation Project which is working to recover and restore the impressive and valuable collection of original art and historical photographs amassed by McPherson Schools back in the 1920s. At the request of the school district advisory board, one of Norma’s own former students, Cynthia Mines, produced a masterful book with color prints of much of this recovered art which now hangs in the new McPherson Museum. Thanks to a gift last year from The Mingenback Foundation, all proceeds of this book’s sales has and will go to restoration, conservation and education about the McPherson Schools Art Collection. Memorials may be sent in care of the Glidden - Ediger Funeral Home; 222 West Euclid Street; McPherson, Kansas 67460.

A long-time McPherson resident, Norma Tucker passed through the veil between heaven and earth ever so gently the morning of May 22, 2016. She was under Hospice care at The Cottages of Chandler Creek in Round Rock, TX. Dr. Norma Tucker was born,... View Obituary & Service Information

The family of Norma Jean Tucker created this Life Tributes page to make it easy to share your memories.

A long-time McPherson resident, Norma Tucker passed through the...

Send flowers to the Tucker family.