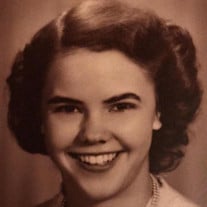 Patricia Lynn Frazier, 86, died July 10 at the Cedars care facility in McPherson. Pat was a friend of many, a talented businesswoman, loyal member of the St. Joseph&#8217;s Roman Catholic Parish, and an example of both warmth and grit to... View Obituary & Service Information

The family of Patricia Lynn Frazier created this Life Tributes page to make it easy to share your memories.

Send flowers to the Frazier family.