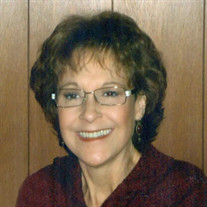 Patricia Sue "Patti" Ladd, of McPherson, Kansas, passed away peacefully at home on Thursday, February 11, 2021. Patti was born in McPherson, Kansas on December 31, 1958, a daughter of Joyce (Duguid) and James Parker. Patti attended McPherson grade schools and graduated from McPherson High School in 1976. She then attended Emporia State University and then went on to Ottawa University where she graduated with her BS degree in education. She later went back to Emporia State University where she received her Master Degree in school counseling. She was a member of the First Presbyterian Church in McPherson. Patti was a homemaker, and she took great pride in providing a loving and nurturing home for her family. She began working as an elementary school teacher in Lawrence, Louisburg and Maize before getting her Masters Degree and moving to McPherson and working for USD 418 at Lincoln Elementary School as a school counselor. In 1993, she was diagnosed with Leukemia and was forced to retire. Patti was united in marriage to Dale L. Ladd on June 13, 1992 at the First Presbyterian Church in McPherson where the couple established their home. She is survived by husband Dale Ladd of McPherson, her son Dain Smith, (Cambria) of Grass Valley, California, mother Joyce Schrag, sisters Laura Parker and Judi Schmidt (Kent) of McPherson, father James Parker (Linda), Hutchinson, 2 grandchildren Patrick and Olivia Smith, and many nieces and nephews. She is preceded in death by her stepfather, Delbert Schrag. A private family graveside service will be held at a later date at the McPherson Cemetery. Memorial contributions can be made to Mt. Hope Sanctuary and Women and Children Combating Cancer (WACCC) in care of Glidden-Ediger Funeral Home, 222 W. Euclid, McPherson, Ks. 67460.

The family of Patricia Sue "Patti" Ladd created this Life Tributes page to make it easy to share your memories.

Send flowers to the Ladd family.