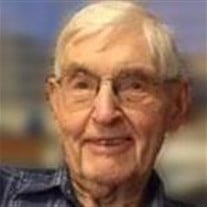 Paul Zeke Anderson, 90, of Mcpherson, KS, passed away at 10:20 am, Saturday, May 13th, while in the company of family members, at Cedars House . Paul was born in on his parents farm on the kitchen table rural Smolan, Kansas on August 20, 1926, son of Naomi (Carlson) and Emanuel Edward "Manny" Anderson. Paul attended Smolan grade schools and graduated from Smolan High School, Smolan, Kansas in 1944. He then attended Bethany College, Lindsborg, Kansas graduating in 1949 with his Business Degree. He was a member of Trinity Lutheran Church McPherson, Kansas where he served his church in many capacities. He grew up in the Salemsborg Lutheran Church where he was Baptized and Confirmed. Zeke joined the U.S. Marines during WW II. and honorably served his Country. Zeke worked his whole career for Kansas Power And Light in Great Bend, Salina, and McPherson, Kansas and retired as Division Manager. Zeke was a member of Lions Club, McPherson Chamber of Commerce, McPherson Industrial Development Company, United Way, Santa Fe District Scouts, City Recreation Commission, served as Mayor of McPherson for two terms and was a member of the Great Bend Rotary Club. He enjoyed huntiing, fishing, golfing, serving his community, and his passion was caring for his family. Paul was united in marriage to Marion Lucille Pearson on June 18, 1950 at First Lutheran Church Kansas City, Missouri. The young couple established their first home together in Great Bend, Kansas. This union was blessed with the birth of 2 sons, Ron and Dennis "Andy". In 1951 the family moved to Salina, Kansas prior to moving to McPherson. He is survived by his loving and devoted wife of over 66 years, Marion Anderson, of McPherson, Kansas; his son, Dennis "Andy" Anderson and his wife Sonnie, of Goshen, Ohio; his brother, Norman Anderson, of Long Beach, California; his sister, Ilene Cooper, of Salina, Kansas; his 5 grandchildren, Aaron, Parker, Molly, Lucy, and Abby; his 2 great-grandchildren, Everett and Charli; many nieces and nephews, other relatives and a host of friends. Zeke was preceded in death by his parents; a son Ronald Paul Anderson; brothers, Harley Anderson, Leo Anderson, and Dave Anderson Friends are invited to call on Wednesday, May 17, 2017 from 9a.m. to service time at Trinity Lutheran Church, McPherson. The memorial service will be held at Trinity Lutheran Church, McPherson, Kansas, at 11:00 a.m. on Wednesday, May 17th, 2017 with The Reverend Tim Leaf officiating. The final resting place will be at Salemsborg Lutheran Cemetery, Smolan, Kansas at a later date. In lieu of flowers, memorial contributions may be made to Trinity Lutheran Church or Salemsborg Lutheran Church and they can be sent in care of the Glidden - Ediger Funeral Home; 222 West Euclid Street; McPherson, Kansas 67460.

Paul Zeke Anderson, 90, of Mcpherson, KS, passed away at 10:20 am, Saturday, May 13th, while in the company of family members, at Cedars House . Paul was born in on his parents farm on the kitchen table rural Smolan, Kansas on August 20,... View Obituary & Service Information

The family of Paul Zane "Zeke" Anderson created this Life Tributes page to make it easy to share your memories.