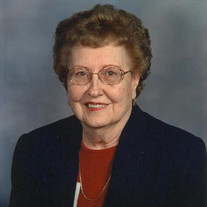 Pauline Brichacek - Sondergard, 94, of McPherson, Kansas, passed away at 10:23 a.m., Friday, January 26th, 2018 peacefully, at Hutchinson Regional Medical Center, Hutchinson, Kansas. Pauline was born in on her parents farm in Gentry County, Missouri on February 17, 1923, a daughter of Jessie Glee (McNatt) and Floyd Clifford Williamson. Pauline attended grade schools in Missouri, and graduated from Paradise Rural High School, Paradise, Kansas. She was a member of First Presbyterian Church McPherson, KS. Pauline was a homemaker and worked at Eldon's IGA, a book-keeper for McPherson State Bank, and later a teller for Citizen's State Bank for several years prior to becoming an assistant cashier for Peoples Bank and Trust until her retirement in 1986. Pauline was a member of Order of Eastern Star and American Legion Post 24 Ladies Auxiliary. She enjoyed golf, traveling, playing cards, and especially her grandchildren. She was also an excellent quilter and quilted many items for her family and others. Pauline Williamson was united in marriage to Glenn Alvor Brichacek on August 2, 1947 at Solomon, Kansas. The young couple established their first home together in Lucas, Kansas and they were blessed with the birth of two sons, Gary and Russell. In 1950 they moved to Lincoln, Kansas until 1952 when they moved to Lyons, Kansas. In 1957 they moved to McPherson, Kansas. Glenn died on October 10, 1981. Pauline Brichacek was united in marriage to Dale Jorgen Sondergard on March 9, 1998, at McPherson, Kansas and this union brought 3 sons and 1 daughter to the family, Ronald, Arnold, Lyle, and Barbara . Dale died on November 2, 2000. She is survived by children, Gary Brichacek and wife Miriam, of Hesston, Kansas, Russell Brichacek and wife Tudi, of Topeka, Kansas; step children, Sharon Sondergard, of Raleigh, North Carolina, Arnold Sondergard and wife Judy, of Lincoln, California, Lyle Sondergard and wife Jill, of Montrose, Colorado, and Harvey McCarter and wife Marilyn, of McKinney, Texas; her grandchildren, William Brichacek, Andrea Schaaf and husband Nathaniel, Joseph Brichacek, Jennifer Neal and husband Clay, and Jeff Fizer and wife Chasity; her great-grandchildren, Clayton Fizer, Mayci Fizer, Maddie Neal, Mollie Neal, and Kinley Fizer, and her great-great-granddaughter, Emerie Fizer; other relatives and a host of friends. Pauline was preceded in death by her parents; her husbands, Glenn A. Brichacek and Dale J. Sondergard; her brothers, Floyd, William, and John Williamson; a step-daughter Barbara McCarter; and a Step-Son Ronald Sondergard. Visitation will be held on Tuesday. January 30, 2018 from 4 to 6 p.m. at Glidden - Ediger Chapel, McPherson. The funeral service will be held at First Presbyterian Church, McPherson, Kansas, at 1:30 p.m. on Wednesday, January 31st, 2018 with Reverend H. Dick Reynolds, Jr. officiating. Burial will be at the Lucas Cemetery Lucas, Kansas. Memorials are suggested to First Presbyterian Church and can be sent in care of the Glidden - Ediger Funeral Home; 222 West Euclid Street; McPherson, Kansas 67460.

The family of Pauline Brichacek Sondergard created this Life Tributes page to make it easy to share your memories.

Send flowers to the Sondergard family.