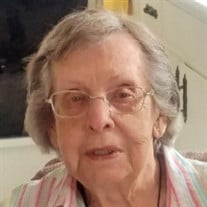 Pearl Lorene Ediger, 93, of Mcpherson, Kansas, passed away at 10:45 a.m., Wednesday, January 26th, 2022, at Heartland Haven in Inman. Pearl was born in Canton, Kansas on June 26, 1928, a daughter of Agnes (Loewen) and Ernest Weyand. Pearl attended Battle Hill grade School and graduated from Canton High School, Canton, Kansas in 1945. Through the years Pearl was a homemaker and prior to getting married, Pearl worked at the Canton Pilot Newspaper, Canton, Kansas. Pearl enjoyed needle point, embroidering, cross stitching, cooking and spending time with friends and family. Pearl Lorene Weyand was united in marriage to Wilbur Vernon Ediger on March 6, 1949, in Canton. The young couple established their first home together in McPherson. This union was blessed with the birth of four children, two daughters and two son, Doug, Debbie, Brent and Angela. She is survived by her children Debbie Johnson and her husband Vaughan, of McPherson, Kansas, Angela Sevilla and her husband Scott, of Hughson, California and Doug Ediger, of McPherson, Kansas. Pearl was preceded in death by her parents, her husband, Wilbur and her son, Brent. A graveside service at McPherson Cemetery, McPherson, Kansas will be held at a later date. Memorials can be made to Good Shepherd Hospice Foundation, and they can be sent to Glidden-Ediger Funeral Home, 222 W. Euclid St., McPherson, Ks. 67460.

The family of Pearl Lorene Ediger created this Life Tributes page to make it easy to share your memories.

Pearl Lorene Ediger, 93, of Mcpherson, Kansas, passed away at...