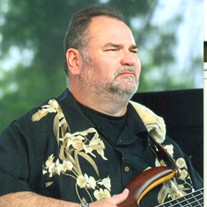 Pedro Degollado Ojeda, 58, of San Antonio, Texas, passed away at 9:30 p.m., Friday, August 10th, 2018 while in the company of family members. Pedro was born in San Antonio, Texas on May 16, 1960, a son of Aldefina (Degollado) and Ben Ojeda. Pedro attended and graduated from San Antonio Schools, San Antonio, Texas. He was a member of St. Joseph's Catholic Church McPherson. Pedro was a member of Musicians Union, San Antonio, Texas. Pedro enjoyed playing and teaching music, he was a mentor in the San Antonio music community, Loved playing the Bass guitar and he was known as "The Legend", he has left behind a family of musicians and many friends. Pedro was united in marriage to Kacia Lee Beach on August 1989. The young couple established their first home together in San Antonio, Texas. This union was blessed with the birth of a daughter, Olivia Rose Ojeda. Pedro was united in marriage to Catalina Coker in San Antonio, Texas until they parted ways but remained friends throughout the years. He is survived by his daughter Olivia Rose Ojeda, of Oak Hills, California; his sister Sylvia Clark and her husband J. Dennis, of McPherson, Kansas; his niece Tina Schwartz and her husband Troy and his nephew Paul Herrera. Pedro was preceded in death by his adopted parents; his brother Joe Fresquez, Jr. and his biological mother Beda Wiedner Mahlman. Services and burial will be in Texas at a later date.

The family of Pedro Degollado Ojeda created this Life Tributes page to make it easy to share your memories.

Send flowers to the Ojeda family.