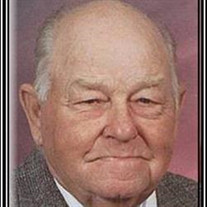 Raymond R. Anderson, 93, of McPherson, Kansas, passed away at 5:12 p.m., Saturday, May 6th, suddenly, at McPherson Hospital. Raymond was born in at his parents farm, Kansas on March 30, 1924, a son of Anna (Mortensen) Andersen and Pete Andersen. Raymond attended Rural McPherson County schools and graduated from McPherson High School, McPherson, Kansas. He was a member of First Baptist Church McPherson, KS. Raymond served in the U.S. Navy as a 1st Class Seaman in WW II. Raymond was a farmer for all his life. Raymond also served as an assessor for the Delmore Township. He was a life member of the McPherson V.F.W. Post 2715, McPherson, Kansas. Raymond enjoyed, farming, nature, coffee at the Red Barn, The KC Royals, going to the V.F.W. dinners, and loved eating, especially angel food cake. He also enjoyed working on and collecting antique John Deere Tractors and spending time with his family during the holidays. Raymond R. Anderson was united in marriage to Maurita (Hays) Hawkinson on October 7, 1960 at Kansas City, Kansas. She died on April 12, 2009. He is survived by his brother, Frank A. Anderson, of Belle Plaine, Kansas; his sister-in-law, Carol Anderson, of Lindsborg, Kansas; his step-children Doug Hawkinson and his wife Karen, of McPherson, Kansas and Janet Lou Watts, of Lenexa, Kansas; his nephews and nieces, Daryl Anderson, of Lindsborg, Kansas, Dennis Anderson, of Larned, Kansas, Deanne Haverfield and her husband Rick, of Salina, Kansas, Bryan Anderson and his wife Lisa, of Derby, Kansas, and Daniel Anderson and his wife Michelle, of Belle Plaine, Kansas; his 7 grandchildren, 14 great-grandchildren, several great-great-grandchildren; many other nephews, nieces, other relatives and a host of friends. Raymond was preceded in death by his parents, his wife Maurita Anderson his brother Floyd Anderson, his step-son, Larry Hawkinson, and a nephew, Allen Anderson. Friends are invited to call on Wednesday, May 10, 2017 from 6 to 8 p.m. at the First Baptist Church, McPherson. The funeral service will be held at First Baptist Church, McPherson, Kansas, at 3:00 p.m. on Thursday, May 11th, 2017 with Reverend Andrew "Andy" Currier officiating. The Final Resting Place will be at the New Gottland Lutheran Church Cemetery rural McPherson, KS. Members of the Veterans of Foreign Wars Post 2715 and American Legion Post 24 will provide military honors. In lieu of flowers, memorial contributions may be made to First Baptist Church or the V.F.W. Post 2715 in memory of Raymond and they can be sent in care of the Glidden - Ediger Funeral Home; 222 West Euclid Street; McPherson, Kansas 67460..

Raymond R. Anderson, 93, of McPherson, Kansas, passed away at 5:12 p.m., Saturday, May 6th, suddenly, at McPherson Hospital. Raymond was born in at his parents farm, Kansas on March 30, 1924, a son of Anna (Mortensen) Andersen and Pete Andersen. Raymond... View Obituary & Service Information

The family of Raymond R. Anderson created this Life Tributes page to make it easy to share your memories.

Raymond R. Anderson, 93, of McPherson, Kansas, passed away at...