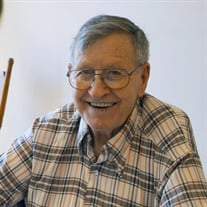 Raymond Fredrick "Ray" Eilrich, 89, of McPherson, Kansas, passed away at 4:22 a.m., Tuesday, October 26th, 2021 peacefully at Angel Arms. Raymond was born in Ellsworth, Kansas on October 22, 1932, a son of Fred Eilrich and Wilhamina (Bohl) Eilrich. Ray attended the Ellsworth schools in Ellsworth, Kansas. He was a member of Countryside Covenant Church in McPherson. He served in the U.S. Air Force in the Korean War. Ray was a farmer, worked for the State of Kansas in the Department of Transportation Road Maintenance, and worked for Walmart as an Assembler. Ray enjoyed talking, telling stories, baking treats for his grandkids and spending time with his friends and family. Raymond was united in marriage to Wilma Ruth Lee on June 19, 1976 at Lorraine, Kansas. This union was blessed with the birth of a son Steven. She died on August 23, 2002. He is survived by his son, Son Steven Eilrich and his wife Tiffani Eilrich, of McPherson, Kansas; his siblings, Neita Brisco, of Lincon County, Kansas, and Marie Woodmanse, of Ellsworth, Kansas. He is also survived by his 2 grandchildren, Reanna Rose Eilrich and Hunter Ray Eirich, both of McPherson, Kansas and his special friend Rita VonFeldt. Ray was preceded in death by his parents; his wife, Wilma; his brothers Ador Eilrich, Lou Eilrich and Ferd Eilrich; his sisters Wilhamina Donaley and Leona Eilrich and a grandson, Kooper Riece Eilrich A memorial service will be held on Friday, Oct. 29, 2021 at 10:00 at Countryside Covenant Church, McPherson, Kansas, with Reverend Jeremy Bower officiating. Burial will be at the McPherson Cemetery McPherson, Kansas, with military honors provided bt the American Legion Post 24 and the Veterans of Foreign Wars Post 2715 with Mark Casebeer playing trumpet. Family request donations to Countryside Covenant Church and they can be sent to the Glidden-Ediger Funeral Home; 222 W. Euclid St., McPherson, Kansas 67460.

The family of Raymond Fredrick "Ray" Eilrich created this Life Tributes page to make it easy to share your memories.

Send flowers to the Eilrich family.