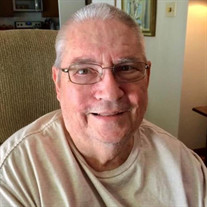 Richard Gordon Yeargan, 84, of McPherson, died at 4:30 a.m., Saturday, January 8th, with his wife Jerri at his side at Pleasant View Home, Inman, Kansas. Richard was born in Wellington, Kansas on December 6, 1937, a son of Mildred Lorene (Bartlett) and Gordon Arnold Yeargan. Dick graduated from Goodland High School, Goodland, Kansas in 1955. He then attended Fort Hays University where he received his Bachelor's degree, He received his Master's degree from University of Northern Colorado, Greeley, Colorado, and received his PhD (A.B.D.) from Kansas University, Lawrence, Kansas. He was a member of Church of the Brethren McPherson, Kansas. Richard Gordon "Dick" Yeargan was united in marriage to Donna Doudle in 1963 and this union was blessed with the birth of a son Cary Todd. In 1982 Dick was united in marriage to Lillian Rossow Cooley. "Dick" Yeargan was united in marriage to Jerri Mae Wisdom Wall on June 24, 2000 in Eureka Springs, Arkansas. The couple established their first home together Harrison, Arkansas. The couple moved to McPherson in 2005. Dick was a lifelong educator and started his career at El Dorado Middle School, El Dorado, Kansas teaching English, Speech, and Drama. He then taught English and developmental reading at Wichita Southeast High School, Wichita, Kansas. In 1970 Dick founded the Freshman Student Program in University College at Wichita State University. He retired in 1998 from Northwest High School teaching English and gifted students. Dick was a member of A.A. McPherson, Kansas and NEA. He enjoyed music, reading, traveling, movies, theater, watching sports and was an avid fan of the Wichita Shockers, gardening, and family, friends, and his furry canines. He is survived by his loving and caring wife of over 21 years, Jerri Wall-Yeargan, of McPherson, Kansas; his step children, Eric "Ric" Wall and wife Patricia "Patti" Wall, of McPherson, Kansas, Angela "Angel" Decker, of San Antonio, Texas, Robin O'Connor and husband Phillip, of Everett, Washington, and Christopher "Chris" Wall, of McPherson, Kansas; his brother, Robert George Yeargan, husband of Christopher Nance, of Palm Springs, California; his sisters-in-law, Billie Jean Jones and husband Robert, of Panama City Beach, Florida and Patricia Mast and husband James, of Brunswick, Ohio; his nine step grandchildren, Eric Wall, Landon Wall, Collyn Wall, Whitney Wall, Carson O'Connor, Christopher Decker and wife Leah, Carley Hall and husband Matthew, Miles Wall, and Isabella Wall and Fiance Carter Robinson; three great-grandchildren, Taylen Wall, Caleb Decker, and Harrison Decker; other relatives, many students and a host of friends. Dick was preceded in death by his parents, Gordon and Lorene Yeargan; a son, Cary Todd Yeargan; and his wife Lillian Yeargan. A Memorial Service will be held at 1:00 PM on Friday, January 21st 2022 at Church of the Brethren in McPherson, Kansas with Reverend Kathryn Whitacre officiating. Masks required. A You Tube Link has been set up at: https://youtu.be/GNsfJjgoxAA and will be Live Streamed if you can not make it to the memorial service.. Burial will be at the McPherson Cemetery McPherson, Kansas at a later date. In lieu of flowers, memorial contributions may be made to McPherson Dog Park or the Church of the Brethren McPherson, and they can be sent in care of the Glidden - Ediger Funeral Home; 222 West Euclid St., McPherson, Kansas 67460.

Richard Gordon Yeargan, 84, of McPherson, died at 4:30 a.m., Saturday, January 8th, with his wife Jerri at his side at Pleasant View Home, Inman, Kansas. Richard was born in Wellington, Kansas on December 6, 1937, a son of Mildred Lorene... View Obituary & Service Information

The family of Richard "Dick" Gordon Yeargan created this Life Tributes page to make it easy to share your memories.

Send flowers to the Yeargan family.