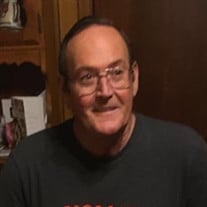 Richard Shane "Rich" Farmer, 63, of Galva, KS, passed away at 10:38 p.m., Saturday, April 25th, while in the company of family members, at his home. Richard was born in Hoisington, Kansas on February 8, 1957, a son of Henrietta (Tausher) and Herman Farmer. Rich attended the St. John The Evangelist Catholic School, Hoisington, Kansas. Through the years Rich worked in the oil fields, Dillon's Grocery Store, and was currently the owner and operator of Farmer's Tree Service and Farmer's Bee's. Rich enjoyed Bee Keeping, Fishing, being out-of doors, spending time with his family especially his grandchildren and great-grandchildren. Richard Shane Farmer was united in marriage to Karen Sue Freeman Gee on July 5, 1996 in Haysville, Kansas. The couple established their first home together in Haysville. This union brought together Rich's son, Nathan and Karen's son and daughter Tony and Gina. In 2006 the couple moved to Galva. He is survived by his loving and devoted wife Karen Farmer, of Galva, Kansas; his son, Nathan Farmer, of Claflin, Kansas; his step-children, Tony Gee and wife Tammy, of Blue Springs, Missouri and Gina Venable and husband Larry, of McPherson, Kansas; his sisters, Gloria Loomer and husband David, of Sidney, Montana, Kathy Scott, of Hoisington, Kansas, and Janie Boyd, of Hoisington, Kansas; his six grandchildren, Derick, Devin, Tyler, Ashley, Nicholas, and Addison; his four great-grandchildren, Theodore, Emerson, Aspen, and Kennedy; several nieces and nephews, other relatives and a host of friends. Rich was preceded in death by his parents, Herman and Henrietta Farmer; and a brother, Danny Farmer. Private family graveside service will be held the McPherson Cemetery, McPherson, KS, with Fr. Ben Shockey officiating. In lieu of flowers, memorial contributions may be made to McPherson Relay For Life in memory of Rich and they can be sent in care of the Glidden - Ediger Funeral Home; 222 West Euclid Street; McPherson, Kansas 67460.

Richard Shane "Rich" Farmer, 63, of Galva, KS, passed away at 10:38 p.m., Saturday, April 25th, while in the company of family members, at his home. Richard was born in Hoisington, Kansas on February 8, 1957, a son of Henrietta (Tausher) and... View Obituary & Service Information

The family of Richard Shane Farmer created this Life Tributes page to make it easy to share your memories.

Send flowers to the Farmer family.