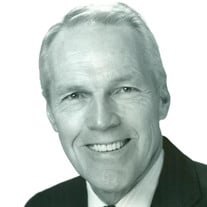 Richard Dale "Dick" Nichols, 92, of McPherson, Kansas, passed away at 8:13 p.m., Thursday, March 7th, 2019 surrounded by his family at his home. Dick was born in Fort Scott, Kansas on April 29, 1926, a son of Olive Marston (Kittell) and Ralph Dale Nichols. Dick attended the Manhattan grade school, Manhattan, Kansas, Fort Scott Junior High and High School and graduated from Paola High School, Paola, Kansas in 1943. Following college stints in the Navy V-12 program at Kansas University, Park College, Missouri and University of Notre Dame, he served aboard a minesweeper in the North Atlantic, then a brand new destroyer in the Gulf Coast. After his naval service, he graduated from Kansas State University with degrees in agricultural economics and technical journalism. He was a member of First United Methodist Church McPherson, Kansas, where he taught an adult Sunday school class and sang in the choir. He honorably served in the U.S. Navy. Dick started working in 1951 for the Kansas State Board of Agriculture and WIBW Radio Station in Topeka, Kansas. He started in the banking business in 1957, at the Hutchinson National Bank, Hutchinson, Kansas. In 1969 Dick moved to McPherson and served as President of Home State Bank & Trust Co. and served in this capacity until 1990 when he was elected to the U.S. Congress as a Congressman of the 5th District. Following his service in the Congress he returned to the bank as Chairman of the Board. He had been in banking for 54 years. Dick has served as President of the Kansas Bankers Association, the McPherson Chamber of Commerce, McPherson Rotary Club, McPherson Arts Council, and served as Commanding General of the Kansas Cavalry and board member of Kansas, Inc. He was also a member of the American Legion Post 24 and Veterans of Foreign Wars Post 2715 both of McPherson. Dick was enthusiastic about life, enjoyed sports, playing the piano, and participating in golf and tennis. Dick and his wife Linda enjoy their blended families of children and grandchildren. Dick says, "Much of life is in our mental attitude. If you think great things might happen, they do! If you question them ever happening, they won't!" Richard "Dick" Nichols was married to Constance "Connie" Weinbrenner on March 25, 1951 at Hutchinson, Kansas. This union was blessed with the birth of three children, two sons and a daughter, Philip, Ronald, and Anita. Connie died on June 28, 1994. Richard Nichols was united in marriage to Linda Carol (McGrew) Hupp on 04/21/1996 at the First United Methoidst Church Chapel, McPherson. This union brought Linda's, children, Kathryn and Douglas into the family. He is survived by his loving and devoted wife of over 22 years, Linda Nichols, of McPherson, Kansas; his daughter's-in-law, Terri Nichols Colonna and husband Eddie, of Fernandina Beach, Florida and Linda Nichols, of Kansas City, Missouri; his children, Ronald Nichols and wife Candace, of Overland Park, Kansas and Anita Bomberger and husband Lane, of McPherson, Kansas; his step-son, Douglas Hupp and wife Joanna, of Bel Aire, Kansas; his brother, David Nichols and wife Marilyn, of Denver, Colorado; his sister's-in-law, Polly Nichols, of Asheville, North Carolina and Beverly Ebel, of Estes Park, Colorado; his 18 grandchildren; his 18 great-grandchildren; several nieces and nephews, other relatives and a host of friends. He was preceded in death by his parents; 1st wife, Connie Nichols; a son, Phillip Nichols; a step-daughter, Kathryn Elizabeth Lewis and a brother Elgene Nichols. Visitation will be held on Tuesday, March 19 2019 from 5 to 7 p.m. at the First United Methodist Church, McPherson. Celebration of life service will be held at 11:00 a.m. on Wednesday, March 20, 2019 at the First United Methodist Church, McPherson, Kansas, with Reverend Karen Rice-Ratzlaff officiating. The final resting place will be at the McPherson Cemetery McPherson, Kansas with military honors presented by members of the American Legion Post 24 and Veterans of Foreign Wars Post 2715 both of McPherson. In lieu of flowers, memorial contributions may be made to First United Methodist Church or Camp Wood and they can be sent in care of the Glidden - Ediger Funeral Home; 222 West Euclid Street; McPherson, Kansas.

The family of Richard Dale "Dick" Nichols created this Life Tributes page to make it easy to share your memories.

Send flowers to the Nichols family.