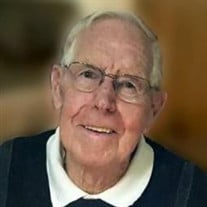 Richard Jacob "Dick" Pfalzgraf, 91, of McPherson, Kansas, passed away at 7:35 a.m., Thursday, August 27th, 2020 while in the company of family members, at Brookdale McPherson. Dick was born in Arkansas City, Kansas on January 22, 1929, a son of Charles Archer and Esther Gertrude (Brooks) Pfalzgraf. Dick attended and graduated from McPherson High School in 1947, McPherson, Kansas. He served in the U.S. Army in the Korean War Era. Through the years Dick worked at N.C. R. A. as a operator and finished his career as an instrument man until he retired in 1991. Dick was a member of Veterans of Foreign Wars Post 2715, American Legion Post 24 and Men's Golf Association. Dick enjoyed golfing, fishing, hunting, gardening and spending time with his friends and family. Richard Jacob "Dick" Pfalzgraf was united in marriage to Patricia Joan "Pat" Brown on December 9, 1953 in Lexington, Missouri. With Dick in the military being shipped out to Korea, Pat stayed in McPherson with some family. Upon Dick's Honorable discharge, the young couple established their first home together in McPherson. This union was blessed with the birth of three children, one son and two daughters, Richard, Debra, and Sheryl. He is survived by his children, Richard Pfalzgraf and his wife Janet, of Navarre, Florida, Debra Mogle and her husband Roland, of Wichita, Kansas and Sheryl Harding and her husband Jeff, of Oklahoma City, Oklahoma and his sister, Diana Heer and her husband Ken, of Colorado Springs, Colorado. He is also survived by 2 granddaughters, Lauren Fort and husband Brian and Brooke Pfalzgraf. Dick was preceded in death by his parents; his wife, Patricia Pfalzgraf; his siblings, Maxine Larson, LaVon Ball, Grace Pfalzgraf, Harold Pfalzgraf, Allen Pfalzgraf and Kathryn Brown. A visitation will be held on Sunday, August 30, 2020 from 2:00 p.m. - 4:00 p.m. at Glidden - Ediger Chapel. A graveside service will be held on Monday, August 31, 2020 at 11:00 a.m. at the McPherson Cemetery, McPherson, Kansas, with Herb Smith officiating. Military Honors will be provided by the American Legion Post 24 and the Veterans of Foreign Wars Post 2715. In lieu of flowers, memorial contributions may be made to McPherson Humane Society and they can be sent to Glidden-Ediger,222 W. Euclid St., McPherson, Kansas 67460.

Richard Jacob "Dick" Pfalzgraf, 91, of McPherson, Kansas, passed away at 7:35 a.m., Thursday, August 27th, 2020 while in the company of family members, at Brookdale McPherson. Dick was born in Arkansas City, Kansas on January 22, 1929, a son... View Obituary & Service Information

The family of Richard Jacob "Dick" Pfalzgraf created this Life Tributes page to make it easy to share your memories.

Send flowers to the Pfalzgraf family.