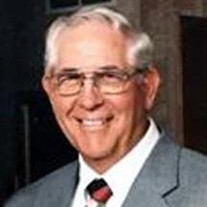 Richard Leigh "Dick" Ramsdale, 90, of McPherson, Kansas, passed away at 6:15 a.m., Monday, April 23rd, 2018 peacefully, at Pleasant View Home, Inman, Kansas. Richard was born in Anness, Kansas on September 16, 1927, to Walker Bryan and Carrie (Hedrick) Ramsdale. He attended the two-room Mt. Pleasant grade school near his parent's farm, and graduated from Norwich High School in 1945.  He entered the United States Army in February of 1946 honorably served his country, and was discharged in March of 1947 as a Technician 4th Grade. He then attended Kansas State University in Manhattan, Kansas, where he graduated with honors in 1950 with a B.S. degree in agricultural education. He later received his master’s degree in education from K-State. Dick was united in marriage to Nadine Lowrey on August 8, 1948 at the Methodist Church in Norwich, Kansas.  They established their first home together in Manhattan, Kansas while he attended Kansas State University. Upon graduation, he became the vocational agriculture teacher for Moundridge High School, and then in 1954 he and Nadine moved to McPherson, when he accepted a teaching position as the vo-ag teacher at McPherson High School. Throughout his over 40 years as a teacher and later as the first director of McPherson's area vocational technical school, he was particularly proud of his FFA livestock judging teams that won three state and one national title. Dick was a lifetime farmer of family land northeast of Norwich, Kansas, first with his father and then with his son, Leigh. He was happiest when sitting on the seat of a tractor or driving a combine. He enjoyed attending sporting events with his wife, Nadine, spending time with his children and grandchildren, and in his later years, chatting with friends over breakfast at Wendy's.  Dick was a member of the Kansas Teachers Association, and a member of the McPherson Masonic Lodge. He is survived by his three children, Janelle Tauer and husband Loren, of Ithaca, New York, Marc Ramsdale and wife Jody, of Knoxville, Tennessee, and Leigh Ramsdale and wife Rhonda, of Milton, Kansas; his seven grandchildren, Gregory Tauer and his wife Nicolette, Kristen Tauer, Cassey Peters, Jackie Tubaro and her husband Adam, Ross Ramsdale and his wife Erika, Bryan Ramsdale, and Courtney Ramsdale; his sisters Barbara Withee, of Manhattan, Kansas and Margaret Ramsdale, of Hutchinson, Kansas; other relatives and a host of friends and former students. Dick was preceded in death by his parents Walker and Carrie Ramsdale, and his wife Nadine.  Visitation will be on Friday, April 27 from 5 to 7 p.m. at the Glidden-Ediger Chapel in McPherson, KS. The funeral service will be held at 10:00 a.m. on Saturday, April, 28, 2018 at Glidden-Ediger with Reverend H. Dick Reynolds, Jr. officiating. Graveside services will be held Saturday at 2:00 p.m. at the Upchurch Cemetery in rural Norwich.   In lieu of flowers, memorial contributions may be made to Kansas State University or the National FFA Organization and they can be sent in care of the Glidden-Ediger Funeral Home, 222 West Euclid Street; McPherson, Kansas 67460.

The family of Richard L. Ramsdale created this Life Tributes page to make it easy to share your memories.

Send flowers to the Ramsdale family.