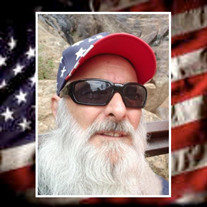 Rick W. Baise, 60, of Galva, Kansas, passed away at 11:00 p.m., Friday, May 31st, 2019 while in the company of family members at his residence. Rick was born in McPherson, Kansas on June 30, 1958, a son of Nancy B. (Blair) Janssen and Billy M. Baise. Rick attended Roosevelt Elementary School, McPherson Junior High and McPherson High School, McPherson, Kansas and Salina South High School, Salina, Kansas. He then attended Salina Vo-Tech School, Salina, Kansas. He served in the Kansas National Guard. Through the years Rick worked as a truck driver for several companies throughout his career. He also worked for BMG of Kansas as a welder for the last 9 years. Rick was a member of ABATE of Kansas, District 9 member and The Patriot Guard. Rick enjoyed riding and building motorcycles, camping, fishing with his grandpa, spending time with his grandchildren and taking his loving wife on motorcycle trips to the Rocky Mountains in Colorado. Rick Baise was united in marriage to Janet L. Gray on November 13, 2009 in McPherson, Kansas. The couple established their first home together in Galva, Kansas. He is survived by his loving and devoted wife Janet Baise, of Galva, Kansas; his children, Alisha Janssen, of Campbellsville, Kentucky, Melissa Shandy and her husband Andrew, of McPherson, Kansas, Michael Janssen and his wife Rachael, of Hutchinson, Kansas, Danielle Clements, of McPherson, Kansas, Jessica Baise, of California, Shawn Stucky, of Chicago, Illinios, Travis Stucky, of Galva, Kansas, Josie Parker and her significant other Cody Kindel, of Canton, Kansas, Bruce Parker Jr. and his wife Carlee, of Little River, Kansas; his mother Nancy Janssen, of McPherson, Kansas; his siblings, Barb LaBlanc and her husband Jim, of Baton Rouge, Louisiana and Bill Janssen and his partner Nikki Cody, of McPherson, Kansas. He is also survived by 17 grandchildren; many nieces and nephews; other relatives and a host of friends. Rick was preceded in death by his brother Jerry Janssen and his Step-father Bill Janssen. A memorial service will be held Saturday, June 8, 2019 at 3:00 p.m. at the Glidden - Ediger Chapel, McPherson, Kansas with Chaplin Nick Miller officiating. Military honors will be provided by the American Legion Post 24 and the Veterans of Foreign Wars Post 2715 of McPherson. Burial will be at a later date. In lieu of flowers, memorial contributions may be made to Rick Baise Memorial Fund and they can be sent to Glidden-Ediger Funeral Home; 222 West Euclid St., McPherson, Kansas 67460.

The family of Rick W. Baise created this Life Tributes page to make it easy to share your memories.

Send flowers to the Baise family.