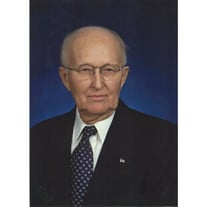 Robert L. 'Bob' Harder, 89, of McPherson, Kansas, passed away at 7:43 a.m., Thursday, September 24th, 2015 peacefully, at McPherson Hospital. Robert Lee Harder, the son of Arthur H. and Anna M. (Hassman) Harder, was born April 19, 1926 on his parents small farm east of Groveland, Kansas. This union was blessed with the birth of five children, two sons and three daughters, Raymond, Florine, Robert, Fern, and Velma. At the age of three, his family moved to another farm 9 miles north of Windom. Bob attended Lookout Country School rural Windom and Windom High School where he was voted class president, played basketball, and participated in High Y Boys. When Bob was in his last months of his senior year, he received a notice that he had been drafted into the Army. After boot camp, on July 20, 1944 Bob entered into the United States Army and served with the 310th Infantry 78th Division during W.W.II. He served 1 year, 5 months, and 26 days overseas and 5 months and 23 days of continental service. He received the Combat Infantryman Badge, Rifle MM, Army of Occupation Medal (Germany), European-African-Middle Eastern Theater Service Medal, Good Conduct Medal. He was honorably discharged on July 8, 1946 and returned home. Robert Lee Harder was united in marriage to a young lady and classmate of his, Lola Lucille Titus on January 21, 1947 at Little River, Kansas. The young couple established their first home together in McPherson. This union was blessed with the birth of two children, one son and one daughter: Monte and Stacy. The family joined the First United Methodist Church and they have been faithful members since. Bob held many positions in the church for 15 years. Bob began working in the electric motor business in McPherson in 1947 and bought the business in 1958. He and his wife Lola operated Harder Electric for 26 years before selling in 1984. After his retirement he was elected to the position of commissioner of streets and utilities in 1986 and held the position for 15 years. Bob was a member of Veterans of Foreign Wars Post 2715; American Legion Post 24; ISIS Shrine Salina, McPherson Masonic Lodge. Bob served as president of the McPherson Chamber of Commerce in 1976-1977 where he was able to establish the new office complex that is used today. On December 15, 2003, Bob and his family were deeply saddened by the death of Lola. Bob was a Christian, loving and devoted husband, father, grandfather, great-grandfather, brother, uncle, and dear friend. His wise counsel, gentle but firm guidance, and sensibility will be missed by those who knew and loved him. He was very proud of his children and always wanted the best for them. He was especially fond of his grandchildren and great-grandchildren, always looking forward to their visits and times they would share together. Bob enjoyed vacations with family, traveling with Lola, watching his granddaughters sporting events, watching his grandson grow and spending summers at the creek with him, playing poker on Tuesday nights, eating breakfast at Mr. B’s with the guys, spaghetti dinners with the family, Sunday morning church and breakfast and spending time with his great-grandkids. Robert L. Harder, 89, of McPherson, Kansas, passed away at 7:43 a.m., Thursday, September 24th, while in the company of family members, at McPherson Hospital. Bob was preceded in death by his parents; his wife, Lola Harder; brother Raymond Harder and sister Velma Warburton. Bob is survived by his children, Stacy Thomas and her husband Jan, of McPherson, Kansas and Monte Harder and his wife Carol, of Dodge City, Kansas; his sisters, Fern Raleigh, of Windom, Kansas and Florine Richmond, of Van Buren, Arkansas; his 3 grandchildren, twins, Samantha Jarvis and her husband Joe and Savannah Carlson and her husband Ben, and Mackenzie Thomas; his 4 great-grandchildren, Addy Carlson, Wyatt Carlson, Paisley Carlson, and Blakley Jarvis; several nieces and nephews, other relatives and a host of friends.Friends are invited to call on Tuesday September 29, 2015 from 9 until service time at First United Methodist Church. The funeral service will be held at First United Methodist Church, McPherson, Kansas, at 11:00 a.m. on Tuesday, September 29th, with Reverend Karen Rice-Ratzlaff and Reverend Harold E. Nelson officiating. The congregation will sing “In The Garden” and “Because He Lives”. The final resting place will be at the McPherson Cemetery McPherson, Kansas. Members of the American Legion Post 24 and Veterans of Foreign Wars Post 2715 will provide military honors. In lieu of flowers, memorial contributions may be made to First United Methodist Church or McPherson Shrine Children's Fund and they can be sent in care of the Glidden - Ediger Funeral Home; 222 West Euclid Street; McPherson, Kansas 67460.CASKET BEARERSSamantha and Joe Jarvis Savannah and Ben CarlsonMackenzie Thomas Danielle WilsonUSHERSBob Moore Harold Schlender

The family of Robert L. Bob' Harder created this Life Tributes page to make it easy to share your memories.