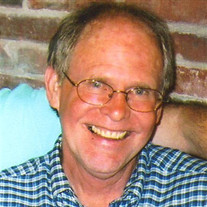 Robert Gene (Bob) Brax, 73, of McPherson, Kansas, passed away at 9:05 p.m., Thursday, February 7th, 2019 while in the company of family members, at McPherson Hospital. Robert was born in Lindsborg, Kansas on July 19, 1945, a son of Raymond Carl and Alice Amelia (Ericson) Brax. Bob attended the Assaria grade school and graduated from Assaria High School, Assaria, Kansas in 1963. He then attended Bethany College, Lindsborg, Kansas where he received his BS degree in Math. He later attended the University of Utah, Salt Lake City, Utah where he received his BS degree in Meteorology. He was a member of Church of the Brethren in McPherson He served in the U.S. Air Force as a Captain in the Vietnam War. Bob received the NDSM, SAEMR, VSM, RVCM, AFLSA, AFM 900-3/ AFCM SOG-308 HQ13 AF 72. Bob worked for Farmer's Alliance Insurance Company for 25 years and at the time of his retirement he was the Vice President of Loss Control. Bob was a member of the McPherson Optimist Club and a lifetime member of the Bethany B-Club. Bob enjoyed playing all sports, especially tennis and golf, with his wife and son. Robert Gene "Bob" Brax was united in marriage to Jill Marie Magnuson on April 13, 1968 at Assaria, Kansas while Bob was on leave from the United States Air Force. While in the Air Force the young couple established their first home in Salt Lake City, Utah while he was getting his degree in Meteorolgy for the service. They then moved to Smyrna, Georgia where he was stationed at Dobbins Air Force Base. After his service in Vietnam and Thailand, Bob was stationed at Travis Air Force Base in Fairfield, California. They were blessed with a son, Jeffrey. After completing his military service the family moved to Vacaville, California where he worked at Safeco Insurance as a Loss Control agent. The company then moved the family to Nashville, Tennessee. In 1979 the family moved to McPherson, Kansas and started his employment at Farmers Alliance Insurance Company. He is survived by his loving and devoted wife Jill Brax, of McPherson, Kansas; his brothers, Don Brax and his wife Kathy, of Washington, Kansas, Allan Brax and his wife Cheryl, of Grand Island, Nebraska and David Brax and his wife Sue Ann, of St. Louis, Missouri. Bob was preceded in death by his parents, and his son, Jeffrey Charles Brax. Visitation is Wednesday, February 13, 2019 from 5:00 p.m. to 7:00 p.m. at the Glidden - Ediger Chapel. A memorial service is at the Church of the Brethren, McPherson, Kansas, at 2:00 p.m. on Thursday, February 14th, 2019 with Reverend Chris Whitacre and Kathryn officiating. A graveside service will be held Thursday, February 14, 2019 at 3:00 p.m. at the McPherson Cemetery with military honors presented by the American Legion Post 24 and the Veterans of Foreign Wars Post 2715. The final resting place will be at the McPherson Cemetery, McPherson, Kansas In lieu of flowers, memorial contributions may be made to Parkinson's Foundation or The Cedars and they can be sent in care of the Glidden - Ediger Funeral Home; 222 West Euclid Street; McPherson, Kansas 67460.

Robert Gene (Bob) Brax, 73, of McPherson, Kansas, passed away at 9:05 p.m., Thursday, February 7th, 2019 while in the company of family members, at McPherson Hospital. Robert was born in Lindsborg, Kansas on July 19, 1945, a son of Raymond... View Obituary & Service Information

The family of Robert Gene Brax created this Life Tributes page to make it easy to share your memories.

Send flowers to the Brax family.