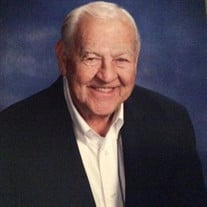 It is difficult to put into words the value of a life and the importance of fond memories.  Priceless is the one word that comes to mind.  Robert (Bob) Dale Christensen is remembered most fondly for his smile and sense of humor.  He never left home without it.  His memory lives on in the stories of his children, grandchildren and friends.  Though many are sad at the news of his passing, one cannot deny the joyous reunion of Bob and his dear wife Shirley Ann (Freeburg) Christensen in heaven.  Husband and Wife were reunited May 5, 2017 at 12:14 in the morning. Frank Sinatra played in the background and his children and grandchildren told of fond memories as he peacefully transitioned into heaven. On April 14, 1930 to J.C. “Fat” Jewell Clifford and Elizabeth Ann (Thye) Christensen, Bobby Dale Christensen entered the world later to be joined by his sister Carolyn.   The family made their home in McPherson, and Bob remained a home-town boy for the majority of his life.  He attended McPherson High and graduated with the Class of 1948. Over the years, Bob enjoyed keeping in contact with classmates and attending reunions. It was during his freshman year of high school that Bob began his first job, that would become his lifelong career.  Joining the staff of Humfeld’s Floral and Green House in 1944, Bob was eager to work.  He would often assist the designers in a rush to be able to complete his next delivery.  Mr. Humfeld explained one day to Bob that he could no longer be a delivery driver.  Bob naturally was concerned he was about to be fired.  However, Mr. Humfeld went on to explain he was actually being promoted to designer.  Mr. Humfeld had noticed Bob’s extensive natural talent for floral design, and wanted to encourage Bob to continue learning more about the business. After graduation from high school, Bob then attended Kansas State University, where he studied floriculture.  He was called to serve his Country during the Korean War and after being honorably discharged he returned home to McPherson. It was shortly after that time that Bob met and married Shirley Ann Freeburg on June 10, 1956 at the Trinity Lutheran Church, McPherson, Kansas.  The young couple established their first home together in McPherson and they were blessed with the birth of three children, a daughter and two sons; Pamela, Steve and Jim. As perfect complements, the couple teamed up to purchase Humfeld’s Nursery in 1962. Shirley provided her business acumen and bookkeeping skills, while Bob provided the design talent. They renamed the company, McPherson Floral and moved the store in the 1970’s from its original site on Ash Street, to its final location at 104 S Main Street.  Alongside many dear employees and family members, McPherson Floral remained successful until its closing in 2015.  71 years in total, Bob spent serving the residents of  McPherson and the surround areas with beautiful flower arrangements. He retired at the age of 85. In 2002, Bob was deeply saddened by the unexpected passing of Shirley.  In many ways life would never be the same.  He was a dedicated husband and remained as such even after Shirley’s transition to Heaven. Bob lovingly prepared Shirley’s funeral floral tribute as he had also done for his Mother, Father, Sister and many other dear friends.   Few things brought as much joy to Bob as his grandchildren; Jessica, Lucas, Michael and Matthew.  “Papa” was his name and spoiling was his game.  He never came to visit empty handed and would always bring candy, toys, and “mad money” for each to enjoy.   Bob often told stories about each of the kids and was very proud grandfather.  All of the grandchildren worked at McPherson Floral around the holidays now and again. In 2010, after graduating college, his granddaughter Jessica began working at McPherson Floral as a bookkeeper.  Much like her grandfather, Jessie soon ended up behind the design bench.  In 2013, Jessie purchased McPherson Floral.  They worked together until 2015.  Jessie credits her love of floral design to her grandfather.  Her design skills are a legacy that lives on, passed from grandfather to granddaughter.  Jessie is honored to make the final floral tribute for Bob’s memorial service in remembrance of all her grandfather taught her. Bob was preceded in death by his parents, J.C. Clifford "Fat" and Elizabeth (Thye) Christensen; his wife Shirley (Freeburg) Christensen; his sister, Carolyn Lafferty, and his son, James Robert "Jim" Christensen.   Surviving family members include his children, Pamela  Ammons and her husband Callan of Towanda, Kansas and Steve Christensen and wife Lisa of Tongonoxie Kansas;  his grandchildren, Jessica (Ammons) Crow and husband Clancy of Chattanooga, Oklahoma, Lucas Ammons of Towanda, Kansas, Michael Christensen of Los Angeles, California and Matthew Christensen of Tonganoxie, Kansas; and one  great-grandchild, Caroline Crow of Chattanooga, Oklahoma. The memorial service will be held Monday, May 22 at Trinity Lutheran Church in McPherson, Kansas at 1 pm. with the Reverend Tim Leaf officiating. Special music "Amazing Grace", "It Is Well With My Soul" and "In The Garden" will be sung and played by Michelle King. Private family burial of cremains will take place following the service.   In loving memory of Bob and his 71 years of floral service, the family encourages flowers  to celebrate Bob’s life.  His work was a blessing to so many and it seems appropriate to celebrate his life with flowers. Memorial donations may also be made to The McPherson County Humane Society and the McPherson Trinity Lutheran Church and they can be sent in care of the Glidden - Ediger Funeral Home; 222 West Euclid Street; McPherson, Kansas 67460.

It is difficult to put into words the value of a life and the importance of fond memories.  Priceless is the one word that comes to mind.  Robert (Bob) Dale Christensen is remembered most fondly for his smile and sense of humor.  He never left... View Obituary & Service Information

The family of Robert Dale Christensen created this Life Tributes page to make it easy to share your memories.

It is difficult to put into words the value of a life and the...

Send flowers to the Christensen family.