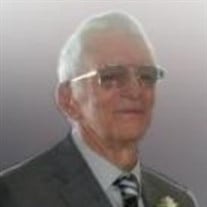 Robert Lee "Bob" Duren, 85, of McPherson, KS, passed away at 2:00 p.m., Thursday, January 7th, while in the company of family members, at McPherson Hospital. Bob was born in Providence, RI on January 24, 1935, a son of Genevieve "Jennie" Deloratta (Tedeschi) and William Lee Duren. Bob Graduated from Grossmont Union High School, El Cajon, California in 1952 and attended Ventura Community College, Ventura, California. Robert Lee Duren was united in marriage to Mary Frances Winn on June 21,1957 at the United Methodist Church in McPherson, Kansas. The young couple established their first home in McPherson and they were blessed with the birth of four children, two daughters and two sons, Terri, David, Kathleen, and Robert II. He was a member of First United Methodist Church, McPherson, KS. Bob served in the U.S. Air Force as a Airman First Class and was honorably discharged. He received the National Defense Service Medal and Good Conduct Medal. Bob worked for N.C.R.A. now known as CHS, and at the time of his retirement was a Transfer Department Supervisor. Bob was a member of Serendipity Good Sams Camping Club, Hutchinson and Buffalo Sams Camping Club of McPherson; American Legion Post No. 24, McPherson, Kansas. He served on the Board of the McPherson Senior Center. Bob enjoyed traveling, woodworking and was good working with his hands, time with his family and he loved his daily piece of Cheese and Pepperoni. He is survived by his loving and devoted wife of over 63 years, Frances Duren, of McPherson, Kansas; his children, Terri Kilbride and husband Barry, of Burrton, Kansas, David Duren and wife Melody, of McPherson, Kansas, Kathleen Pritchard and husband Price, of McPherson, Kansas; and Robert Duren II and wife Hyunhee, of Rosehill, Kansas; his sister, Joy Rendon, of Columbus, Ohio; his 14 grandchildren; 13 great-grandchildren with one on the way; other relatives and a host of friends. Bob was preceded in death by his parents, Bill and Jennie Duren and a brother, William L. Duren, Jr. Graveside service at McPherson Cemetery, McPherson, Kansas, at 11:00 a.m. on Friday, January 15th, 2021 with Reverend Emily Cannon officiating. Military honors will be presented by members of the American Legion Post 24 and Veterans of Foreign Wars Post 2715. In lieu of flowers, memorial contributions may be made to Kansas Honor Flight or the McPherson Senior Center and they can be sent to Glidden-Ediger Funeral Home; 222 w. Euclid St., McPherson, Ks. 67460.

Robert Lee "Bob" Duren, 85, of McPherson, KS, passed away at 2:00 p.m., Thursday, January 7th, while in the company of family members, at McPherson Hospital. Bob was born in Providence, RI on January 24, 1935, a son of Genevieve "Jennie" Deloratta... View Obituary & Service Information

The family of Robert Lee "Bob" Duren created this Life Tributes page to make it easy to share your memories.

Send flowers to the Duren family.