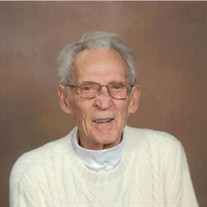 Robert Leon "Bob" Hill, 93, of McPherson, Kansas, passed away at 7:20 a.m., Wednesday, September 30th, 2020, while in the company of family members at McPherson Hospital. Bob was born in McPherson, Kansas on September 13, 1927, a son of Harry Bryan and Verbie Blanche (Whitney) Hill. Bob attended the Grasshopper Country School, rural Galva, Kansas, and graduated from Galva High School in 1945. He then attended McPherson College, McPherson, Kansas. He was a member of Trinity Lutheran Church in McPherson. Bob started working as a patrol officer for the McPherson Police Department and through 21 and a half years, retired as the Assistant Chief of Police. Bob worked for Winfield Bus Company as a Bus Driver for 8 years prior to working for Precision Chrome of McPherson as a Truck Driver for 16 and 1/2 years. Bob then worked for Trinity Lutheran Church as a custodian for 3 1/2 years. Bob was a member of McPherson Lions Club; American Legion Post 24; Veterans of Foreign Wars Post 2715 and the Disabled American Veterans. Bob enjoyed hunting, fishing, baseball, football, basketball and all sports, refinishing furniture, going to auctions, baking and cooking. Bob served in the United States Navy during W. W. II and was stationed aboard the Battle Ship Alabama where he earned Seaman 2nd Class. In 1946 he was released from regular Navy to go to Reserve. In 1951 Bob was called back into regular Navy where he was stationed on the ship U.S. Delta as a BMG 3. He served in the Korean War at this time. The ship was in the Japan and Korean area for 10 months and he was then released from the Navy in 1954 with his honorable discharge. Bob was united in marriage to Shirley Ann Shafer on May 20, 1950 in Albuquerque, New Mexico. Shirley died on March 31, 2002. Bob was united in marriage to Goldie Marie Hamann Arnold on June 4, 2006, at Trinity Lutheran Church, McPherson, Kansas. The couple established their first home together in McPherson. He is survived by his loving and devoted wife Goldie M. Hill, of McPherson, Kansas; his children, Craig Hill and his wife Linda, of Wichita, Kansas, David Hill and his wife Penni, of McPherson, Kansas, Debra L. "Debi" Hill, of McPherson, Kansas, Barbara "Barbi" Austin and her husband John, of Great Bend, Kansas; his step-children, Larry Arnold and his wife Donna, of Tucson, Arizona, Faye Albrecht and her husband David, of Troy, Missouri, Kevin Arnold, of Goodland, Kansas, Jeff Arnold, of Wichita, Kansas and Judi Koehn, of Lumberton, North Carolina and his sister, Betty Kuttler and her husband Del, of Spokane, Washington. He is also survived by 8 grandchildren; 25 Step grandchildren; 29 step great-grandchildren and 4 step-great-great-grandchildren. Bob was preceded in death by his parents; his first wife, Shirley; his brother, Clinton and Billie Hill; his granddaughter Katy Hill; his step-granddaughter Elaine Marie Arnold and a step-great-granddaughter Danielle Albrecht. Visitation will be held on Sunday, October 4, 2020 from 4:00 p.m. - 7:00 p.m. at Glidden-Ediger Chapel, McPherson, Kansas. Memorial service will be held on Monday, October 5, 2020 at 10:00 a.m. at Glidden-Ediger Chapel, McPherson, Kansas with Pastor Tim Leaf officiating and will be broadcasted live on Trinity Lutheran Church Facebook page. Burial will be at the McPherson Cemetery McPherson, Kansas. Military Honors will be provided by the American Legion Post 24 and the Veterans of Foreign Wars Post 2715. Memorial contributions are to Trinity Lutheran Church, Meals on Wheels or the McPherson County Food Bank and they can be sent to Glidden-Ediger Funeral Home; 222 W. Euclid Street; McPherson, Kansas 67460.

Robert Leon "Bob" Hill, 93, of McPherson, Kansas, passed away at 7:20 a.m., Wednesday, September 30th, 2020, while in the company of family members at McPherson Hospital. Bob was born in McPherson, Kansas on September 13, 1927, a son of Harry... View Obituary & Service Information

The family of Robert L. "Bob" Hill created this Life Tributes page to make it easy to share your memories.

Send flowers to the Hill family.