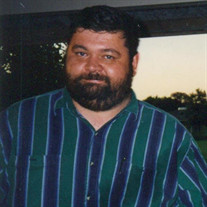 Robert Lester "Bob" Hopp, 65, of Abilene, Kansas, passed away at 12:23 am, Sunday, January 30th, 2022 while surrounded by his family, at Salina Regional Health Center, Salina, Kansas. Bob was born in Lindsborg, Kansas on August 27, 1956, a son of Shirley Esther (Pintler) and Lester Leroy Hopp. He attended the Lindsborg schools and graduated from Lindsborg High School, Lindsborg, Kansas in 1974. Bob participated in FFA in high school and received numerous awards. He later attended various trade and service schools all over the United States for his work. Bob loved the Lord, and was a member of the First Baptist Church, Lindsborg and later became a member of Harmony Christian Church, McPherson. Robert Lester Hopp was united in marriage to Beth Marie Perkins on May 2, 1987 at the First Baptist Church, Lindsborg, Kansas. The young couple established their first home together in Lindsborg, Kansas. This union was blessed with the birth of two sons, Adam and Owen. The family resided in McPherson county until they moved to Abilene, Kansas in 2003. Through the years Bob worked as a farmer on the family farm and for other neighbors. He worked at Columbia Industry as an extruder operator, an assistant service manager and tech for Daur Implement, fuel delivery for Farmers Union Elevator, an assistant service manager and tech for Case Power and Equipment, and was an accomplished block machinist at Engquist Tractor Service. Bob was skilled in complete block repair, and had developed several tools to make some machining jobs possible. In 2001, in an AERA (Engine Builders Association) Idea Contest, he came up with an idea that won first place. Bob has been working for over 18 years for Abilene Machine, Solomon, Kansas and was currently the Engine Shop Supervisor. Bob enjoyed farming, agriculture, anything mechanical and valued all his fellow workers. His family was the most important and he cherished all the times they were able to be together. Especially the holidays and family reunions. He also loved his pets dearly. He is survived by his loving and devoted wife of over 34 years, Beth Hopp, of Abilene, Kansas; his sons, Adam Hopp, of Abilene and Owen Hopp and his fiancée Melissa, of Abilene; his brother Lyle Hopp and his wife Nadine, of Marshall, Texas; numerous nieces, nephews, cousins and aunts; and his favorite grandson, Mason. Bob was preceded in death by his parents; and a sister, Deborah Hopp. A private family graveside service will be held at the McPherson Cemetery in McPherson, Kansas. A Celebration of life will be held on Saturday, February 19th, at the Lindsborg Senior Center, 116 S. Main, Lindsborg, Kansas from 11:00am - 4:00pm. Lunch will be provided by the Hopp family and Abilene Machine. In lieu of flowers, memorial contributions may be made to Robert Hopp Memorial Fund and they can be sent in care of the Glidden - Ediger Funeral Home; 222 West Euclid Street; McPherson, Kansas 67460.

Robert Lester "Bob" Hopp, 65, of Abilene, Kansas, passed away at 12:23 am, Sunday, January 30th, 2022 while surrounded by his family, at Salina Regional Health Center, Salina, Kansas. Bob was born in Lindsborg, Kansas on August 27, 1956, a... View Obituary & Service Information

The family of Robert L. Hopp created this Life Tributes page to make it easy to share your memories.

Send flowers to the Hopp family.