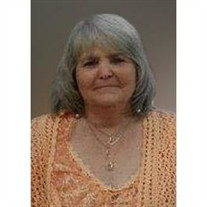 Roberta L. Reitsma, 72, of McPherson, Kansas, passed away at 2:52 p.m., Thursday, August 4th, 2016 surrounded by family, at her residence. Roberta was born in San Bernardino, California on March 12, 1944, a daughter of Ruth (Sikes) and Robert H. Christy.Roberta's father was in the military and she attended many schools in several states and graduated high school from Sanborn Public School, Sanborn, Iowa in 1962. She then attended a business college in Sioux City, Iowa. She was a former member of the First Presbyterian Church and was currently attending First Christian Church McPherson, Kansas. Roberta was a homemaker and she took great pride in providing for her family in this manner. She later worked in the banking industry for several banks including BNC National Bank, McPherson, Kansas as a Mortgage Loan Assistant. Roberta loved her family and they were of the utmost importance to her. She enjoyed knitting, shopping, watching her soap operas, and making jewelry. She loved her job and all the people she would see and meet. Roberta L. Christy was united in marriage to Ronald R. Reitsma on September 8, 1962 at Sanborn, Iowa. The young couple established their first home together in Sanborn, Iowa. In 1969 the family then moved to Little River, Kansas for a year prior to moving to McPherson, Kansas. She is survived by her husband Ron Reitsma, of McPherson, Kansas; her children, Rob Reitsma, of McPherson, Kansas, Ryan Reitsma, of McPherson, Kansas, Renee Williams and her husband Brad, of McPherson, Kansas; her sisters, Marsha Spykerman and her husband Vernon, of Sibley, Iowa and Joella Stratton and her husband Ed, of Winona, Minnesota; her 9 grandchildren, Kassi Reitsma, Chance Reitsma, Raine Reitsma, Ashley Willingham (Justin), Amanda Reitsma, Andrew Reitsma, Karlei Reitsma, Erin Heiman (Cody), and Jacayla Casebeer (Jess); her 9 great-grandchildren - Maleah, Ava, Adi, Jax, Eziekiel, Presley, Deegan, Holden, Mali, with one on the way, Kyden; several nieces and nephews, other relatives, and a host of friends. Roberta was preceded in death by her parents, Robert and Ruth Christy and a son, Randall 'Randy' Roy Reitsma.The memorial service will be held at First Christian Church, McPherson, Kansas, at 11:00 a.m. on Friday, August 12th, 2016 with Pastor Lynn Scott officiating. In lieu of flowers, memorial contributions may be made to Roberta Reitsma Memorial Fund and they can be sent in care of the Glidden - Ediger Funeral Home; 222 West Euclid; McPherson, Kansas 67460.

Roberta L. Reitsma, 72, of McPherson, Kansas, passed away at 2:52 p.m., Thursday, August 4th, 2016 surrounded by family, at her residence. Roberta was born in San Bernardino, California on March 12, 1944, a daughter of Ruth (Sikes) and Robert... View Obituary & Service Information

The family of Roberta L. Reitsma created this Life Tributes page to make it easy to share your memories.

Send flowers to the Reitsma family.