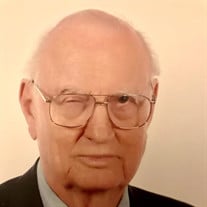 Roger Gilbert Black, 87, of McPherson, Kansas, passed away, Thursday, January 21st, 2021, with his wife Rosalie at his side, in the Cedars Health Care Center, McPherson. Roger was a loving and beloved husband, father, stepfather, grandfather, and great-grandfather who will be greatly missed. Roger was born in Melrose, New Mexico, on July 11, 1933, the son of Eva (West) and Roger Marvin Black. He was proud of his New Mexico heritage and often talked about his grandfathers who had homesteaded in the New Mexico territory before it became a state in 1912. After graduating from Albuquerque High School in 1953, he was drafted by the U.S. Army in 1954, to support the Korean Conflict. Roger received a national Secret security clearance, and he served as a driver for officers who were leading the development of the Atlas Missile Sites surrounding Washington, DC.. He served in the active Army until 1956, and continued in the Army Reserve through 1961, when he was Honorably Discharged, receiving the National Defense Service Medal and the Good Conduct Medal. In 1957, Roger moved to Alamogordo, NM, near the Holloman Air Force Base. He used his natural proficiency in mechanical engineering and metal working at Holloman; employed by private government contractors, as a Lead Mechanical Technician on NASA, Air Force, and General Motors safety research projects. His work included development of seat, lap, and shoulder belts, and air bags for passenger cars, aircraft, and spacecraft. Many of these became the safety standards used today. Roger Gilbert Black was united in marriage with Rosalie Lowe-Snyder on November 26, 1969, in Alamogordo, New Mexico. The couple, and her two daughters, established their first home together in Alamogordo. In 1971, Roger and family moved to Slidell, LA where Roger took a role with the US Civil Service and the US Navy to build a testing facility to conduct the testing of different restraint systems that are currently used in Naval aircraft. In 1996, after 25 years, Roger and Rosalie retired to a beautiful mountain home in northwest New Mexico and enjoyed many years exploring the trails, parks, and mountains of the Southwest. Roger was a avid golfer, winning the City Championship in Alamogordo, one year; and first place, twice in the City Championship Second Flight in Slidell. Roger traded golfing in the sand of New Mexico for fishing in the bayous of Louisiana, while avoiding the alligators. Over the years, he used his skills in carpentry to build many beautiful pieces of wood furniture for the family. Roger was a member of the Aldersgate United Methodist Church in Slidell, LA where he served as Head Usher for 23 years. He has been a member of the McPherson Church of the Brethren for the past twelve years. With other members and college students he has participated in mission projects and trips using his mechanical and carpentry skills to build and rebuild homes for families in need. Roger is survived by his loving, devoted wife of over 51 years, Rosalie. of McPherson, KS; his children, Karen Duprey, of Las Cruces, NM; Diane McGee, husband James, of Hazlet, TX; his step-children, Debra Farrelly, husband James. of Indianapolis, IN; and Susan Throckmorton, husband Scott, of Albuquerque, NM.; his grandchildren, Dawn Bridges (Shane); Alexis Duprey; Robert Farrelly (Kelly); John Farrelly (Monica); Amanda Welles (Sam); Paige Throckmorton (Alexandria); and his great grandchildren, Rosalie and Madelyn Farrelly; Aurora Farrelly; and Matthew Welles. Roger was preceded in death by his parents, Roger M. Black and Eva West Black Wells, and several beloved aunts and uncles. A Celebration of Life service will be held on Saturday, July 17, 2021 at 10:30 a.m. at the Cedars Wellness Center with Reverend Chris Whitaker officiating. Memorials are suggested to the TV Ministry of the McPherson Church of the Brethren and may be sent to Glidden-Ediger Funeral Home, 222 W. Euclid St., McPherson, KS 67460

Roger Gilbert Black, 87, of McPherson, Kansas, passed away, Thursday, January 21st, 2021, with his wife Rosalie at his side, in the Cedars Health Care Center, McPherson. Roger was a loving and beloved husband, father, stepfather, grandfather,... View Obituary & Service Information

The family of Roger Gilbert Black created this Life Tributes page to make it easy to share your memories.

Send flowers to the Black family.