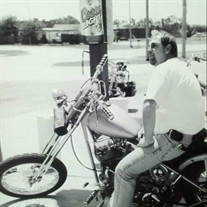 Roger Kemp Scott, 57, of Mcpherson, Kansas, passed away at 2:14 a.m., Monday, February 15th, 2021 suddenly at his residence. Roger was born in Pratt, Kansas on November 29, 1963, a son of Maedellee R. (Mock) Scott and Robert K. Scott. Roger attended Fairfield High School, Langdon, Kansas and then attended and graduated from Brown Mackie, Salina, Kansas. Roger was a member of the Sons of the American Legion Post 24, Veterans of Foreign Wars, Post 2715, ABATE District 9 all in McPherson. Roger enjoyed motorcycles and motorcycle rallies, going to Sturgis, working with 3D printing and spending time with his friends and family. Roger Scott was united in marriage to Tracy Valdez on Oct. 16, 1982 in Salina, Kansas. The young couple established their first home together in Salina. This union was blessed with the birth of a son, Andrew Martin. He is survived by his wife Tracy Valdez, of McPherson, Kansas; his son, Andrew Martin, of Wellington, Kansas; his mother Maedellee Scott, of Turon, Kansas; his siblings, Susie Humphrey and her husband James, of Hutchinson, Kansas, Terri Eskew and her husband Larry, of Kingman, Kansas and Gary Scott and his wife Debby, of Lyons, Kansas; his mother-in-law Gloria Valdez, of McPherson, Kansas and sister-in-law Martha Vancil and her husband Troy, of Salina, Kansas. He is also survived by grandchildren, Sean, Ben and Kale Roger was preceded in death by his father, Robert K. Scott, his sister Sandy and his grandparents, aunts and uncles. Services will be held at a later date.

The family of Roger Kemp Scott created this Life Tributes page to make it easy to share your memories.

Send flowers to the Scott family.