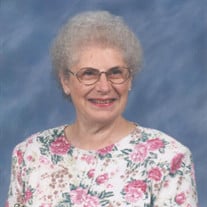 Ruby Lou Eickbush, 89, of McPherson, Kansas, passed away at 10:48 a.m., Wednesday, April 4th, 2018 suddenly, at McPherson Hospital. Ruby was born in Braman, Oklahoma on August 12, 1928, a daughter of Celesta Etta (Jameson) and Norris Edward Tickel. Ruby attended elementary schools in Braman, Oklahoma and graduated from Hays High School, Hays, Kansas. She then attended Fort Hays State Teachers College, Hays, Kansas. She was a member of First United Methodist Church McPherson, Kansas where she served her church in several capacities through the years. Ruby was a homemaker and she took great pride in providing for her family in this manner. She also was a partner along with her husband Robert owning and operating Green's and Armstrong's Furniture Stores both of McPherson. They liked to give and do things for the community in which they considered their back yard. They put a bridge in Lakeside Park and donated two black swans which were named Bob and Ruby, and finished by adding a courtyard and fountain in which they named it Swan Court. They also donated a baseball field when Wall Park was developed. As a memorial to Robert, the family donated the Gallery of Honor Recognition Room at McPherson Hospital and was dedicated on October 20, 1986. This memorial is a reflection of Robert's lifelong desire to enhance the quality of life in the McPherson community. She and her son Bob were currently partners in Eickbush Production Company. Ruby was a member of AY Chapter P.E.O., McPherson Scottish Society, served on McPherson Art's Council Board, Oriental Chapter #580 of Eastern Star, American Legion Auxiliary, McPherson Hospital Auxiliary and Elk's Lodge #502 B .P.O.E., McPherson. Ruby enjoyed bowling, playing bridge and other card games, dancing, fishing, exercise class at the Senior Center and volunteering in her neighborhood collecting donations for numerous causes. Ruby Lou Tickel was united in marriage to Robert Warren Eickbush on June 6, 1948 at Hays, Kansas. This union was blessed with the birth of three children, 2 daughters and one son, Linda Jean, Judith Ann, and Robert Douglas. She is survived by her children, Linda Flores and husband Lazaro, of Lincoln, Nebraska, Judith "Judy" Wilkes and husband Mark, of Wichita, Kansas, and Robert "Bobby" Eickbush and wife Deborah "Debbi", of McPherson, Kansas; her 4 grandchildren, Lyne' McBride (Stacey), Robert M. Eickbush (Nicole) Layne T. Eickbush (Kim), and Taylor M. Wilkes; her 8 great-grandchildren, Troy McBride, Joel McBride, Alexis McBride, Courtney Eickbush, Conor Eickbush, N'Dya Collins, A'Nya Collins, and S'Mya Collins; other relatives and a host of friends. Ruby was preceded in death by her parents; her husband Robert Eickbush; her sister, Betty Jean Guy, and granddaughter Amanda R. Wilkes. Visitation will be held on Sunday April 8, 2018 from 3 to 5 p.m., at Glidden - Ediger Chapel, McPherson. The funeral service will be held at First United Methodist Church, McPherson, Kansas, at 10:30 on Monday, April 9th, 2018 with Reverend Karen Rice-Ratzalff officiating. Final resting place will be at the McPherson Cemetery McPherson, Kansas. In lieu of flowers, memorial contributions may be made to First United Methodist Church or Chapter AY P.E.O. and they can be sent in care of the Glidden - Ediger Funeral Home; 222 West Euclid Street; McPherson, Kansas 67460.

The family of Ruby L. Eickbush created this Life Tributes page to make it easy to share your memories.

Send flowers to the Eickbush family.