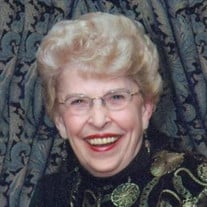 Ruth Marion Dodge, 95, of McPherson, Kansas, passed away Thursday morning, April 16, at 807 Cedars House. Born November 18, 1924, in Racine, WI, to Ingebjorg Margreta Jenson and Lincoln Andrew Peterson, Ruth graduated from Park High School in Racine and was active in her local Methodist church where she was frequently called upon to sing vocal solos. On October 18, 1947, Ruth was united in marriage to George Sebastian Stecher, also of Racine. They set up their first home in the upper floor flat of Ruth’s parents’ home on Maple Street. To this union were born two daughters, Sandra Louise and Gail Marie. Prior to staying home with their two girls, Ruth had worked for J.I. Case Company of Racine. When re-entering the work force after relocating to Milwaukee, she was employed by an insurance company; later she sold World Book Encyclopedias. In 1972 she and George moved to Wheaton, IL, to start their own business. There she served as an administrative assistant to the head of Fiat-Allis, then worked for Shonkwiler Real Estate Company in Glen Ellyn, IL, and retired from a position as Assistant to the Head of the Charitable Gifts Division of Northern Trust Bank in downtown Chicago. Ruth loved her church, serving as a choir director and soloist, while being active in numerous women’s organizations. In Milwaukee she sang in the Florentine Opera and the Lutheran Chorale. When living in the Chicago metro area, she and George were active in the Wheaton College Oratorio Society, the College of DuPage Vocal Ensemble, and the Glen Ellyn Grace Lutheran Church Choir. Upon retirement Ruth and George moved to Lakeview, AR, where they spent nine years in a retirement community. When George’s health failed, they relocated to The Cedars Retirement Community in McPherson. Ruth was deeply moved at George’s death July 2, 2000. She became involved in community life at The Cedars Village, joined the Senior Choir at Trinity Lutheran Church, and participated in several women’s organizations at church. She also was invited to join the Domestic Art Club of McPherson and sang in the Bethany Oratorio Society. On March 5, 2005, Ruth married David Ray Dodge. She and David enjoyed five wonderful years together. After David passed away on July 3, 2011, Ruth returned to The Cedars Village. When health continued to fail, she moved to Assisted Living and for the past four years to HealthCare. Ruth was preceded in death by both of her parents, her husband’s George Stecher and David Dodge, and siblings Earl Petersen, Glen Petersen, and sister, Dorthea Clope. Survivors include daughter Sandra Kott (George) of Waltham, MA; daughter Gail Gustafson (Steven) of McPherson; grandchildren Eric Gustafson (Kara) of Derby; Andrew Gustafson (Colleen) of McPherson; Ingrid Gustafson (David Rice) of Brooklyn, NY; and great grandchildren Charlie and Ethan Gustafson of McPherson and Carla and Evan Gustafson of Derby. A private family graveside services will be held Monday afternoon, April 20, 2020 at 2:00 p.m. at the McPherson Cemetery with the Rev. Richard Monson officiating. A memorial service will be held later at the Trinity Lutheran Church late spring/early summer with Rev. Tim Leaf officiating. In lieu of flowers, memorials are suggested to the Trinity Lutheran Church Organ Fund or The Cedars Resident Assistance Fund (“Good Samaritan Fund”) in care of the Glidden-Ediger Funeral Home, 222 W Euclid St, McPherson, KS 67460.

The family of Ruth Marion Dodge created this Life Tributes page to make it easy to share your memories.

Send flowers to the Dodge family.