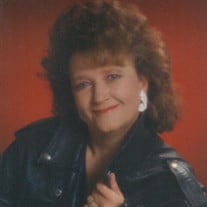 Ruthann Kay Nelson, 69, of McPherson, Kansas, passed away at 9:22 a.m., Wednesday, April 17th, 2019 while in the company of family members, at her home. Ruthann was born in Hastings, Nebraska on October 11, 1949, daughter of Arloa Josephine... View Obituary & Service Information

The family of Ruthann Kay Nelson created this Life Tributes page to make it easy to share your memories.

Ruthann Kay Nelson, 69, of McPherson, Kansas, passed away at...