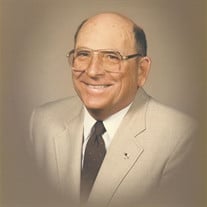 K. Samuel (Sam) Steffy, 88, of McPherson, Kansas, passed away at 1:53 p.m., Sunday, December 17th, 2017 while in the company of family members, at Pine Village, Moundridge, Kansas. Sam was born in Victor, Iowa on October 12, 1929, a son of Florence Pearl (Smith) and Samuel Frank Steffy. Sam attended the Montezuma Consolidated School, having gone from K thru 12, Montezuma, Iowa. He then attended Central University of Iowa, Pella, Iowa. He was a member of St. Anne's Episcopal Church McPherson, KS. Sam honorably served in the U.S. Army during peace time. Through the years, Sam worked for his mother at her funeral home growing up, worked for Skelly Oil Company as a truck driver in Iowa and in the office in Kansas City, Missouri. He then worked in sales and marketing for Modern Products and Vanguard Plastics in McPherson and moved with Vanguard to Twin Springs, Texas, worked for Jet Stream Plastics in Siloam Springs, Arkansas, worked for S.G. Diesel Power, he drove a motor coach, then school bus, and then the McPherson Trolley. Sam was a member of the Jaycee's, Elks Lodge #502 B.P.O.E. and the American Legion Post 24. Sam enjoyed hunting, fishing, golfing, traveling, loved the out-of-doors, and spending time with his family. Sam never met a stranger, and had a story for every occasion. He loved his family, friends, and anything with 4 wheels and was a licensed pilot. K. Samuel Steffy was united in marriage to Gelene Craver on September 3, 1949 at Montezuma, Iowa. The young couple established their first home together in Montezuma. They were blessed with the birth of two children, Steven Kendall and Kari Kay. Through the years the couple lived in Iowa, Missouri, Kansas, Texas, Arkansas before moving back to McPherson in 1976. He is survived by his loving and devoted wife of over 68 years, Gelene C Steffy, of McPherson, Kansas; his daughter, Kari Kay Steffy, of Haysville, Kansas; his sister, Doris C. Steffy and adopted sister Betty Everett, of Green Valley, Arizona; his nephew and nieces, Daniel C. Steffy, of Tucson, Arizona, Gerry Hinks, of Winter Springs, Florida, and Nancy J. Steffy, of Colorado Springs, Colorado; his great-nephews and niece, Greg Stafford, of Orlando, Florida, Jeff Stafford, of Little Elm, Texas, and Stephanie Andrews , of Winter Springs, Florida; other relatives and a host of friends. Sam was preceded in death by his parents; a son, Steven Steffy, a sister, Freda Mulcahy and a brother, Keith W. Steffy. A memorial service will be held at St. Anne's Episcopal Church, McPherson, Kansas, at 10:00 a.m. on Wednesday, December 27th, 2017 with Father Laird MacGregor officiating. Burial will take place at the Montezuma Cemetery, Montezuma, Iowa at a later date. In lieu of flowers, memorial contributions may be made to St. Anne's Episcopal Church and they can be sent in care of the Glidden - Ediger Funeral Home; 222 West Euclid Street; McPherson, Kansas 67460.

The family of Samuel "Sam" Steffy created this Life Tributes page to make it easy to share your memories.

Send flowers to the Steffy family.