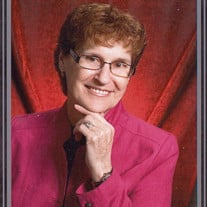 Sharon "Shari" Ann Eckroth, 77, of McPherson, Kansas, passed away at 12:17 p.m., Saturday, November 25th, 2017 while in the company of family members, at Angel Arms. Shari was born in Wing, North Dakota on January 28, 1940, a daughter of Lydia (Merkel) and Theodore Hoffman. Shari attended school in Wing, North Dakota. She was a member of Trinity Lutheran Church McPherson, Kansas. Shari was a homemaker and she took great pride in providing for her family in this manner. She also worked various jobs through the years. Shari was a volunteer for Trash to Treasure in McPherson. Shari enjoyed reading, crafting, gardening, card making, and spending time with her kids and grandkids. Sharon "Shari" Ann Hoffman was united in marriage to Thomas Eckroth on September 18, 1958 at the Cathedral Church in Bismarck, North Dakota. The young couple established their first home together in Bismarck, North Dakota. Thomas died on July 13, 2015. She is survived by her children, Deb Wagner and her husband Jerry, of McPherson, Kansas, Tim Eckroth and his wife Valerie, of Huddleston, Virginia, Todd Eckroth and his wife Laurie, of Bismarck, North Dakota, and Tammy Haid and her husband Loren, of Bismarck, North Dakota; her siblings, Shirley Geiss, of Puyallup, Washington and Robert Hoffman, of Washington State; her 7 grandchildren, Robert Wagner, Dani Wagner, Aeneva Eckroth, Ashley Eckroth, Michael Roehrich, Sarah Schuchard (Jesse), and Chad Roehrich (Mandi); her 3 great-grandchildren, Raegan, Kylie, and Bryce Schuchard; many nieces and nephews, other relatives and a host of friends. Shari was preceded in death by her parents; her husband Thomas; brothers, Don, Arvid, and Willis Hoffman; and sister Fern Klein. Private family graveside services were held at McPherson Cemetery, McPherson, Kansas, at 2:00 p.m. on Tuesday, November 28th, with The Reverend Tim Leaf officiating. In lieu of flowers, memorial contributions may be made to Trinity Lutheran Church Youth Ministry and they can be sent in care of the Glidden - Ediger Funeral Home; 222 West Euclid Street; McPherson, Kansas 67460 .

The family of Sharon Ann Eckroth created this Life Tributes page to make it easy to share your memories.

Send flowers to the Eckroth family.