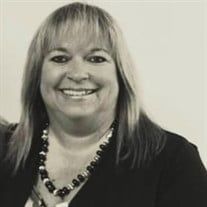 Shelly Raye Ellis, 52, of Galva, Kansas, passed away at 12:52 a.m., Tuesday, January 26th, 2021 peacefully while in the company of family, at Salina Regional Health Center, Salina, Kansas. Shelly was born in Salina, Kansas on March 1, 1968, a daughter of Bonnie Lou (Dix) and Johnny Iseral Hull. Shelly attended Hageman grade school, Salina South Middle School, Sacred Heart High School and graduated from Southeast of Saline High School, Salina, Kansas in 1986. She then attended Brown Mackie College, Salina, Kansas. She attended Sacred Heart Catholic Church Salina, while growing up. Shelly Raye Hull was united in marriage to Kelly Gibson on December 27, 1986 in Salina, Kansas. The young couple established their first home together in Salina. This union was blessed with the birth of two children, a son and a daughter, Kurtis and Kelsie. Shelly R. Gibson was united in marriage to Chad A. Ellis on August 20, 2016. The couple established their first home together in Galva, Kansas. Shelly was a homemaker and she took great pride in providing for her family in this manner. Through the years, Shelly worked for Heartland Early Learning Center in Salina as a secretary; in 2001 she worked for Farmers Alliance Insurance Company and in 2004 Shelly began working for Alliance Agency, Inc as a Personal Lines Agent. She also worked as a bartender for the American Legion Post of Canton and later for the V.F.W. Post 2715 McPherson. Shelly enjoyed watching her favorite teams, the Kansas City Chiefs and KU Basketball and was one of their biggest fans, and loved bowling, golfing, camping, playing poker, dancing, and watching her niece Taryn play softball. She is survived by her husband, Chad Ellis, of Galva, Kansas; her children, Kurtis Gibson, of Wichita, Kansas and Kelsie Fuller and fiancé' Jacob McCage, of Canton, Kansas; her stepdaughter, Aubrie McCoin and husband Austin, of Wichita, Kansas; her siblings, an Identical twin, Kelly Jones and husband Tim, of Galva, Kansas and Johnny Hull and wife Tami, of Olathe, Kansas; her parents, Bonnie & Johnny Hull, of Rossville, Kansas; her niece, Taryn Hull, of Olathe, Kansas and nephew, Jordy Hull, of Olathe, Kansas; her two favorite grandsons, John and Jordan Fuller; other relatives and a host of friends. She was preceded by her grandparents. Shelly Ellis' Celebration of life will be a Open House, Come and Go, and will be held at the Emma Creek Barn just outside of Hesston, Kansas from 12:00 p.m. to 3:00 p.m., on Sunday, April 11, 2021 for anyone who would like to pay their respects or visit with family. In lieu of flowers, memorial contributions may be made to Tammy Walker Cancer Center or Women and Children Combating Cancer and they can be sent in care of the Glidden - Ediger Funeral Home; 222 West Euclid, McPherson, Kansas 67460.

The family of Shelly Raye Ellis created this Life Tributes page to make it easy to share your memories.

Send flowers to the Ellis family.