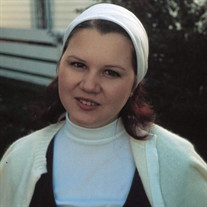 Sherri Lyn Sinders, 74, of McPherson, Kansas, passed away at 8:18 p.m., Thursday, January 7th, while in the company of family members, at her home. Sherri was born in Bluffton, Ohio on August 20, 1946, a daughter of Beverly Rose (Beaupry) Oberly and Richard Wayne Oberly I. Sherri attended Lima grade schools and graduated from Lima High School, Lima, Ohio. She then attended Ohio State University, Columbus, Ohio. Sherri Lyn Oberly was united in marriage to Marcus Earl Sinders on December 20, 1964 at Lima, Ohio. The young couple established their first home together in Lima. This union was blessed with the birth of three daughters, Stacey, Shannon, and Melody. Though the years the family moved from Ohio to California, to Connecticut, to Massachusetts. After the death of her husband Marcus she moved to McPherson, Kansas to be closer to her mother and siblings. She was a member of First Mennonite Church McPherson, Kansas where she was a member of the quilting group. Sherri was a homemaker and she took great pride in providing for her family in this manner. After she moved to McPherson Sherri worked for USD 418 in food service. Sherri enjoyed quilting, sewing, needle work, reading, spending time with family and traveling to New England to visit her kids and grand kids. She is survived by her daughters, Stacey Peloso, of Hamden, Connecticut and Melody McFarren and husband Donald, of Chittenden, Vermont; her son-in-law, Tom Sullivan of Oxford, Massachusetts; her siblings, Richard Oberly, Jr., of McPherson, Kansas and Amber Stucky and husband Gary, of McPherson, Kansas; her five grandchildren, Christian, Erin, Billy, Kristan, and Kody; her one great-granddaughter, Khaylee; several nieces and nephews, other relatives and a host of friends. Sherri was preceded in death by her parents, Richard and Beverly Oberly, her husband Marcus Sinders; a sister, Melody Oberly, a daughter, Shannon Sullivan, and son-in-law, Christopher Peloso. Visitation will be held on Wednesday, January 13, 2021 from 4 p.m. to 6 p.m. at Glidden - Ediger Chapel, McPherson, Kansas. In lieu of flowers, memorial contributions may be made to Women and Children combating cancer or the Giving Hope Cancer Fund in memory of Sherri and they can be sent in care of the Glidden - Ediger Funeral Home; 222 West Euclid Street; McPherson, Kansas 67460.

Sherri Lyn Sinders, 74, of McPherson, Kansas, passed away at 8:18 p.m., Thursday, January 7th, while in the company of family members, at her home. Sherri was born in Bluffton, Ohio on August 20, 1946, a daughter of Beverly Rose (Beaupry)... View Obituary & Service Information

The family of Sherri Lyn Sinders created this Life Tributes page to make it easy to share your memories.

Sherri Lyn Sinders, 74, of McPherson, Kansas, passed away at...

Send flowers to the Sinders family.