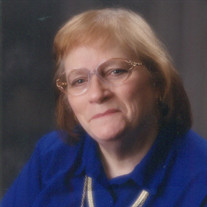 Sherry Ann Matthews, 81, of McPherson, Kansas, passed away at 11:11 p.m., Wednesday, May 10th, 2017 surrounded by her family, at Pleasant View Home, Inman, Kansas. Sherry was born in Sweetwater, Texas on December 4, 1935, a daughter of Pearl (Webb) and Jacob Seth Schlehuber. Sherry attended the Lyons grade schools and graduated from Lyons High School, Lyons, Kansas in 1954. She then attended Central College, McPherson, and graduated with a degree in Dietary from Gainesville, Florida. She was a member of First Christian Church McPherson, KS. Sherry was Baptized in 1946 at the Lyons Christian Church, Lyons, Kansas and has been a faithful member of the Christian Church at Lyons, Concordia and McPherson, Kansas for many years. Sherry was a homemaker and she took great pride in providing for her family in this manner. Through the years she also worked as a telephone operator for Southwestern Bell, rate clerk for Farmers Alliance Insurance Company, and as Assistant Director of dietary for Memorial Hospital, McPherson for 17 years. Sherry was a member of the Dietary Association. She enjoyed her family, music, dancing, her grandchildren, and cooking. Sherry was united in marriage to Lloyd Matthews on August 29, 1954 at Ellinwood, Kansas. Sherry was united in marriage to Earl Fredrick Wyckoff on August 30, 1996 at Miami, Oklahoma. Earl died on August 22, 2002. She is survived by her children, Brent Matthews and his wife Susie, of McPherson, Kansas, Doug Matthews, of McPherson, Kansas, Vicki Eustice and her husband Michael, of Concordia, Kansas, Pamela Goering and her husband Greg R., of Inman, Kansas, and Diane Winter and her husband Troy, of McPherson, Kansas; her sister, Norma Snell and her husband Sheldon, of McPherson, Kansas; her 15 Grandchildren; her 18+ one on the way Great-Grandchildren; two nieces and a nephew, other relatives and a host of friends. Sherry was preceded in death by her parents Pearl and Jacob Schlehuber; a daughter Brenda Decker; a grandson, Michael Matthews; her husbands, Lloyd Matthews and Earl Wyckoff, and a brother Jack Schlehuber. Friends are invited to call on Thursday, May 18, 2017 from 6 to 8 p.m. at Glidden - Ediger Chapel, McPherson. The graveside service will be held at the McPherson Cemetery, McPherson, Kansas, at 10:30 a.m. on Friday, May 19th, 2017 with Pastor Tom Mayse officiating. In lieu of flowers, memorial contributions may be made to Pleasant View Home for Harvest House and they can be sent in care of the Glidden - Ediger Funeral Home; 222 West Euclid Street; McPherson, Kansas 67460.

Sherry Ann Matthews, 81, of McPherson, Kansas, passed away at 11:11 p.m., Wednesday, May 10th, 2017 surrounded by her family, at Pleasant View Home, Inman, Kansas. Sherry was born in Sweetwater, Texas on December 4, 1935, a daughter of Pearl... View Obituary & Service Information

The family of Sherry Ann Matthews created this Life Tributes page to make it easy to share your memories.

Sherry Ann Matthews, 81, of McPherson, Kansas, passed away at...

Send flowers to the Matthews family.