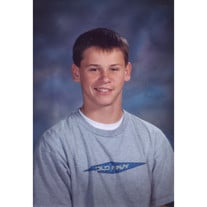 Stephen Caswell (Bud) Stewart, age 16, of McPherson, KS passed away Sunday, January 1, 2006 at McPherson, KS Stephen was born in Pendleton, Oregon on August 10, 1989, he was the son of David C. Stewart and Shari L. (Crane) Cline. He was a Sophomore... View Obituary & Service Information

The family of Stephen Caswell (Bud) Stewart created this Life Tributes page to make it easy to share your memories.