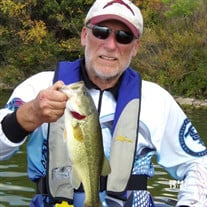 Terrill D Bruton, Sr., 70, of Galva, Kansas, passed away at 11:20 a.m., Thursday, May 2nd, 2019 while in the company of family members at Hospice House, Hutchinson, Kansas. Terry was born in San Bernardino, California on January 2, 1949, a son of Betty Jane (Glosch) Bruton-Zoz and Chester Earl Bruton, Sr. Terry attended Ruth Grimes Grade School in Bloomington, California, Fremont Junior High and graduated from San Bernardino High School, San Bernardino, California in 1967. He was a Baptist throughout his life. Through the years Terry worked for Southern California Edison Power Company as a Clerical Supervisor and retired after 28 years. Terry enjoyed watching and coaching his boys in their sports and activities, fishing, camping and volunteering at Marion Reservoir. Terrill D Bruton was united in marriage to Sandra Fay Tull on July 8, 1967 at San Bernardino, California. The young couple established their first home together in San Bernardino, California. They were blessed with the birth of three sons, Terrill Jr., Christopher, and Timothy. He is survived by his loving and devoted wife Sandra Bruton, of Galva, Kansas; his children, Terry Bruton Jr. and his wife Stacey, of McPherson, Kansas, Chris Bruton and his wife Lori, of Visalia, California, Tim Bruton and his wife Chris, of McPherson, Kansas; his siblings, Lou Ella Martin, of Salina,Oklahoma and C.E. Bruton and his wife , of San Cruz, California. He is also survived by his grandchildren, Tyler, Jenny, Gracie, Connor, Chandler, and Cassidy. Terry was preceded in death by his parents. Friends are welcome to visit the family at 913 E. Hulse St, McPherson, Kansas on Sunday, May 5, 2019 from 2:00 p.m. to 4:00 p.m. Memorials in memory of Terry are suggested to the Christ Kid's Childcare Center and they can be sent in care of the Glidden - Ediger Funeral Home 222 West Euclid Street; McPherson, Kansas 67460

Terrill D Bruton, Sr., 70, of Galva, Kansas, passed away at 11:20 a.m., Thursday, May 2nd, 2019 while in the company of family members at Hospice House, Hutchinson, Kansas. Terry was born in San Bernardino, California on January 2, 1949, a... View Obituary & Service Information

The family of Terrill D. Bruton Sr. created this Life Tributes page to make it easy to share your memories.

Send flowers to the Bruton family.