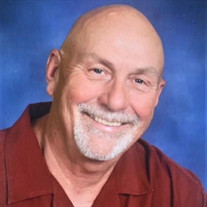 Theodore James “Ted” McVay, age 75, of Sun City West, Arizona passed away on Wednesday, February 9, 2022 while surrounded by his family, at Banner Gateway Medical Center, Gilbert, Arizona. Ted was born in Concordia, Kansas on September 18, 1946, the son of Mary Ruth Jenson and William James McVay. He attended schools in McPherson, Kansas and graduated from McPherson High School in 1964. He pursued his dream of playing college football by attending Hutchinson Junior College on a football scholarship after high school and then went on to play football at Kansas State University. He graduated from Kansas State University in 1968 and was drafted into the U. S. Air Force proudly serving his country. Upon being honorably discharged in 1972, he served a brief stint with the Boy Scouts of America and was then offered an opportunity in the banking industry in Nortonville, Kansas in 1975 which led to a lifelong career in the banking industry. He was appointed and elected to numerous leadership roles with the Kansas Bankers Association, Community Bankers Association of Kansas, Bankers Bank of Kansas and other financial institutions over the years. Ted officially “retired” from Farmers State Bank in McPherson in 2012 but continued to serve on the board of directors and in an advisory capacity until his death. Ted was involved in various community and civic organizations in each community he called home. Those who knew and loved Ted knew how much he loved his grandkids and K-State football. His best days were when he could combine both! After retiring, he enjoyed the beautiful weather in Arizona which allowed him to participate in his other loves—GOLF and Softball! He and Sue enjoyed their traveling adventures especially to Roatan, Honduras and no matter where he traveled he always saw a friend. Ted is survived by his wife Sue (Gracey) McVay, daughter Angela (Matt) Landwehr; daughter Angie (Luke) Schmidt; son Jason (Ghen) Hess; grandchildren McCoy Landwehr; Ben and Jacob Schmidt; Liam, Cassie and Amarisse Hess, Jacqie Schmidt and sister Janis (Dennis) Pauls. He was preceded in death by his parents Bill and Ruth McVay and his daughter Alison McVay. A memorial service for Ted will be held at First Christian Church, McPherson, Kansas on Friday, February 18 at 2 p.m. Members of the Veterans of Foreign Wars Post 2715 and American Legion Post 24 will present military honors with Mark Casebeer playing Taps. The service will be livestreamed and can be seen on the churches Facebook page. The family will receive friends following the service at the McPherson Country Club. In lieu of flowers, memorials may be made to the McVay Family Foundation and sent in care of Glidden-Ediger Funeral Home, 222 W Euclid St, McPherson, KS 67460.

The family of Theodore James "Ted" McVay created this Life Tributes page to make it easy to share your memories.

Send flowers to the McVay family.