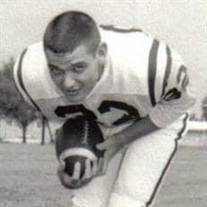 How many lives can one person touch?  Timothy J Wesselowski, who passed away from complications due to COVID-19 on January 2, 2021 in McPherson, Kansas, impacted hundreds if not thousands over the years. He raised his children to work hard and pursue their dreams while being guided by a strong moral compass.  He leaves them behind to complete their own journeys: his daughter Tonya and husband Greg; his son Nathan and wife Amy; his son Blaine and wife Anja, his stepdaughter Barbara and husband Wayne and his stepson Phil.  He was a larger than life, loving grandfather who loved and encouraged his grandchildren: Nicole, Renee, Erin, Lorelei, Isaak, Lydia, Torrey, Trent, Vanessa and Mason to follow their passions as he did.  He also leaves behind two brothers: Walt Wesselowski and Dan West and four great grandchildren.  His family is comforted to know that he will be re-uniting with his loving wife Jean and his brother Tom who left this world before him. He was born in Concordia in 1940 to Harold and Helen Wesselowski. Tim was a Kansas native – a fact that he would embrace with immense pride throughout his entire life.  He grew up in Beloit and eventually attended McPherson College where earned his bachelor’s degree, lettered in both football and track and field, and set a school record in the shot put.  He believed wholeheartedly in the importance of developing an intellectual foundation and would go on to earn a Master’s Degree in Education at Wichita State University. He then began his life’s work – pursuing a long career as a teacher and coach at both the middle and high school levels where he shared his energy, his excitement and his boundless passion for US History and Civics, football and throwing events with the youth of Kansas. Tim began teaching in Brewster, KS in 1962 where he taught high school history while coaching football, basketball and track.  He would then do the same at Chase Rural High School and at Kingman Junior High.  In 1970 he would join the staff of the school that would become his home, McPherson High. Throughout his career, he was never an educator who just went through the motions.  He was always looking for new ways to engage and connect with students – adopting the use of computers and the Internet for the classroom way before it was cool and recruiting technically inclined students to unofficially serve on his own “geek squad” for technical support.  He absolutely loved when students would keep him on his toes by challenging him with questions and ideas – he knew it made him a better teacher.  In both the classroom and on the field, he was no pushover.  He believed in hard work and maximum effort – but he also believed that hard work could be made fun.  His unique ability to blend the roles of task master, cheer leader, instructor, mentor and friend resulted in bonds with his students and athletes that transcended time. A memorial for Tim will be held at an undetermined time in the future once people can gather together without fear contracting the disease that took his life. In remembrance of Tim’s life, the family asks that any charitable donations be made to First United Methodist Church of McPherson or McPherson High School and they can be sent in care of the Glidden - Ediger Funeral Home; 222 West Euclid Street; McPherson, Kansas 67460 and that you please wear a mask In order protect others like Tim.

How many lives can one person touch?  Timothy J Wesselowski, who passed away from complications due to COVID-19 on January 2, 2021 in McPherson, Kansas, impacted hundreds if not thousands over the years. He raised his children to work hard... View Obituary & Service Information

The family of Timothy J. Wesselowski created this Life Tributes page to make it easy to share your memories.

How many lives can one person touch?&#160; Timothy J Wesselowski,...

Send flowers to the Wesselowski family.