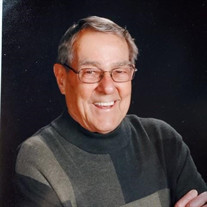 Vernon Lee Dossett, 88, of McPherson, Kansas, passed away at 4:53 a.m., Thursday, December 3rd, 2020 while in the company of family members, at his home. Vernon was born in McPherson, Kansas on September 26, 1932, a son of Katherine "Katie" Lee (Bringhurst) and Ralph Ray Dossett. Vern attended the Lincoln grade school, McPherson Junior High and graduated from McPherson High School, McPherson, Kansas in 1950. He then attended McPherson College for Business Administration and on October 4, 1951 was called to serve his Country and enlisted into the United States Navy during the Korean War and was honorably discharged on July 10, 1953. He then returned to McPherson College and graduated in 1955 with his degree. Vern then attended and graduated from the School of Banking at the University of Wisconsin - Madison in 1967. He was a member of Trinity Lutheran Church McPherson. Vernon Lee Dossett was united in marriage to Mathilda Louise "Tillie" Carlson on December 16, 1953 at New Gottland Lutheran Church, rural McPherson, Kansas. The young couple established their first home together in McPherson. They were blessed with the birth of four children, three sons and one daughter, Michael, Brynel, Cassandra and Eric. Through the years, Vern worked for the Warren Hotel as an Elevator Operator starting at the age of 9 and worked his way up to hotel manager. He was approached and offered a banking position. After serious consideration, he left the hotel and began his banking career with McPherson and Citizens State Bank which later became the McPherson State Bank and Trust where he worked in many capacities and retired as Sr. Vice President and Cashier for McPherson Bank and Trust. In his retirement, Vern ran and was elected Mayor of McPherson and served his community in this manner for three terms. After he retired as Mayor, he began working with his sons in 2003 at Mid Kansas Cylinder Head as President and Janitor. He also served 12 years on the McPherson Board of Public Utilities. Vern was a member of Elks Club 502, American Legion Post 24, and several other community organizations. Vernon enjoyed life; his passion was his family. He took great pride in working on his home and in his yard with all the plants and flowers he planted, helping his community, helping others, and helping his family in their business ventures. He is survived by his loving and devoted wife of nearly 67 years, Tillie Dossett, of McPherson, Kansas; his children, Michael Dossett and wife Kelli; Brynel Dossett and wife Sheryl, Cassie Rierson and husband Joe, all of McPherson Kansas, and Eric Dossett, of Olathe, Kansas; ten grandchildren; 22 great-grandchildren; three great-great-grandchildren; and other relatives and friends. Vernon was preceded in death by his parents, Katie and Ralph Dossett; and his brothers, William R. "Bill" and James "Jim" R. Dossett. Visitation will be held on Tuesday, December 8, 2020 from 5 p.m. to 7 p.m. at Trinity Lutheran Church, McPherson. Masks are required. Private family funeral service will be held at Trinity Lutheran Church, McPherson, at 2:00 p.m. on Wednesday, December 9th, 2020 with The Reverend Tim Leaf officiating. For livestream of service go to http://trinitylutheranmcpherson.org Burial will be in the McPherson Cemetery McPherson, Kansas with military honors presented by members of the Veterans of Foreign Wars Post 2715 and American Legion Post 24, both of McPherson. In lieu of flowers, memorial contributions may be made to Trinity Lutheran Church or Kindred Hospice of McPherson in memory of Vern and they can be sent in care of the Glidden - Ediger Funeral Home; 222 West Euclid Street; McPherson, Kansas 67460.

Vernon Lee Dossett, 88, of McPherson, Kansas, passed away at 4:53 a.m., Thursday, December 3rd, 2020 while in the company of family members, at his home. Vernon was born in McPherson, Kansas on September 26, 1932, a son of Katherine "Katie"... View Obituary & Service Information

The family of Vernon Lee Dossett created this Life Tributes page to make it easy to share your memories.

Vernon Lee Dossett, 88, of McPherson, Kansas, passed away at...

Send flowers to the Dossett family.