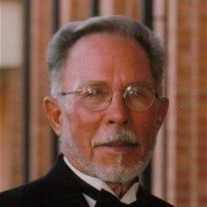 Vernon Ray "Ham" Koehn, 86, of Galva, Kansas, passed away at 9:30 a.m., Tuesday, July 23rd, 2019 while in the company of family members, at Cedars Health Care Center, McPherson. Vernon was born in Chickasha, Oklahoma on September 17, 1932, a son of Jonas and Amanda (Schmidt) Koehn. Ham attended Galva Grade School and graduated from Galva High School, Galva, Kansas in 1951. He was a member of Galva United Methodist Church in Galva. He served in the U.S. Navy in the Korean War. After his military service in the Navy, Vernon started worked in the oil fields in Nebraska and Kansas for eight years, worked for the City of Galva as City Superintendent for thirty one years. He then worked for Turkey Creek Golf Course for over twenty years until he retired in 2015. Ham was a member of the American Legion in Galva and later in McPherson, Kansas and a lifetime member of the Veterans of Foreign Wars Post 2715 of McPherson, Kansas. Ham enjoyed golf, fishing, snow skiing, camping at the lake, running, and spending time watching his grandson play basketball. Vernon was united in marriage to Donna L. Myers on May 20, 1952 in Yuma, Arizona. This union was blessed with the birth two children, a daughter and a son, Cynthia and Brent. Donna died in 1988. Vernon was united in marriage to Laurel Jean (Myers) Ek on February 20, 1992. Laurel died 2015. He is survived by his children, Cynthia Turner, of Clovis, New Mexico and Brent Koehn, of Wichita, Kansas; his step-daughter Gail Wedel, of Galva, Kansas; his grandson, Jonas Koehn Vernon was preceded in death by his parents, his wives, Donna, Laurel Jean; 5 sisters and 4 brothers; and his granddaughter, Sara Spann. A Celebration of Life will be held on Friday, July 26, 2019 from 5:00 p.m. to 7:00 p.m. at Glidden - Ediger Chapel, McPherson, Kansas. Final resting place will be at Empire Cemetery, Galva, Kansas. In lieu of flowers, memorial contributions may be made to Lupus Foundation and can be sent to Glidden-Ediger Funeral Home; 222 West Euclid St. McPherson, Kansas 67460.

The family of Vernon Ray "Ham" Koehn created this Life Tributes page to make it easy to share your memories.